Previously on TAGAP: Penguins from space!

This week's Weekly Penguin celebrates the latest TAGAP 3 patch and it heading to the games distribution service Itch.io! We do with more 'Previously on TAGAP' artwork from TAGAP 4, focusing on the space penguins of Pluto!

Finally here, TAGAP 3 v2.8 brings important stability improvements – hammering out a nasty elusive crash bug and in general featuring extra optimisations. So if you've featured a crash while playing the previous release in particular, this should fix your problems.

Huge thank-you to everyone who helped me nail this bugger down. Especially with my limited hardware access – I literary have only two computers I can test these things on, meaning sometimes I simply can't replicate issues that materialise on specific Windows versions.

Head to TAGAP 3 Downloads and get the update – as usual, available as a full game download or as a smaller patch.

Penguin DT is now a developer on Itch.io – and the latest version of TAGAP 3 is now available through the platform.

And no, TAGAP 3 isn't going commercial – it is still freeware on Itch.io as well.

Why Itch? It's a lovely ecosystem for all kinds of indie projects, from the heavy duty commercial ones all the way to bizarre freeware doodles. TAGAP lies somewhere in the between, so it fits right in – and the option to keep things freeware ensures the tax man can't leech off of Pablo. Everybody wins.

There are only a handful of days I choose to celebrate myself and today is one of those days; April 25th, the World Penguin Day! And this year I'm doing it by unleashing more TAGAP 4 artwork, this time featuring Pablo investigating the clone labs.

Done in the same style as the previously featured 'recap' paintings illustrating the previous games, this one actually covers a scene from TAGAP 4.

This digital painting isn't a piece of promo art, though I admit it does work as one splendidly. It isn't concept art either, but something created for a specific section of the TAGAP 4 extras. However, as these extras are one of the rewards for completing the game, I won't spoil them, at least not today.

Have a fun World Penguin Day, everybody – and remember to think of penguins at least once today.

The Original Dr. Glowenko and his army 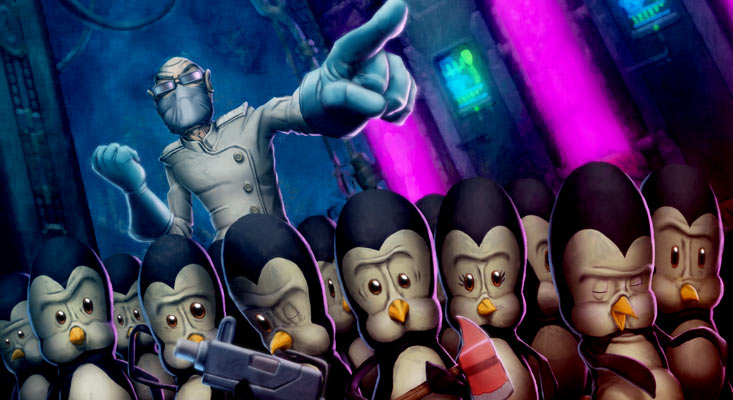 For the second time, the Weekly Penguin focuses on rewinding the time for another snippet from the 'previously on TAGAP' segment of TAGAP 4! This time the spotlight goes to the Dr. Glowenko of the original timeline with his fearsome army.

As before check out the Weekly Penguin entry for the more details and the wallpaper downloads.