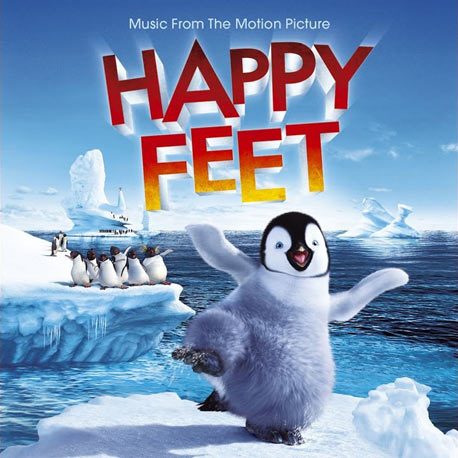 Every now and then a movie comes along that is so overwhelmingly positive that you can't help but to love it. 2006 smash hit CGI animation Happy Feet is such film, featuring an awesome sauce of cute penguins, thoughtful story with hidden depth and, of course, equally positive songs and score.

Let's start this Happy Feet marathon with the soundtrack album, titled "Happy Feet: Music from the Motion Picture". At the first glance it might seem superficial with hipster-sounding artist line-up, but it works well thanks to the smart mixture of classics and contemporary hits.

The album also manages to cover great array of musical styles   pop, disco, reggae and orchestral score, to name a few   while still managing to sound like a whole. Performances are great all around, the cast recordings being the definite highlight. And yes, the medley of John Powell's score will leave you longing for the full score album.

All-in-all, the song album of Happy Feet can be summed up as 'highly entertaining'. It may lack depth and even be slightly superficial, but it still manages to brighten your day with its easy-going wibe.