Pablo is a cyber-penguin genetically built from scratch, grown to be a combat expert and used in vile drug experiments. Instead of joining forces with his creator, the mad scientist Dr. Glowenko, Pablo used his powers for good. Indeed, he has already saved the world three times: from the dastardly plans of Dr. Glowenko, his hench-penguin Pedro and – most recently – the penguin super-villain General Primo.

Now, stranded and imprisoned on an alien world, Pablo is about to embark on his most challenging adventure yet!

Pedro is a cybernetic combat penguin from the same clone batch as Pablo. Though Pedro started out as Dr. Glowenko's henchman, now he and Pablo fight together against evil villains hell-bent on conquering the world.

Now, Pablo's abduction means the heroes have been forced to part ways. Whilst Pablo is fighting the good fight on another world, Pedro is trying to figure out what the heck happened to his brother-in-arms – and how to re-establish contact.

Working undercover in the ranks of PDOH (Pluto Department of Health) as The Nurse, Paola is actually one of the leading members of Pluto's revolutionaries opposing the war against Earth. As she sees Pablo as the key to stopping the war before it escalates, Paola risks her cover by assisting in Pablo's jailbreak. And so the adventure – and the friendship of our lead heroes – begins.

Paola is a jack-of-all-trades not too different from Pablo. Being one of the figureheads of a planet-wide revolution isn't an easy task, but she pulls it off in strides. After being discovered as part of the revolutionaries, she becomes Pablo's new comrade-in-arms.

The Funky Doctor is the surgeon general of PDOH. He holds the post for a reason, as he has developed more new procedures and cures than most Pluto's citizens can hope to remember. Driven, dedicated and slightly eccentric, he lives for his work and aims to push the boundaries of what's medicinally possible. Whatever he is tasked with, he gives it his 110%.

Although these are admirable traits for a doctor and a researcher, the new duties brought upon PDOH by the martial law have shifted both the focus of his work... and his mind. Although he hasn't exactly gone mad, the joy he gets from his work hasn't wavered a bit, even when it involves coming up with methods of destruction instead of healing.

The Funky Botanist is the leader of PDOB (Pluto Department of Botany) and the curator of the cybernetic gardens of Pluto. She is the foremost expert in both cybernetics and flora, having dedicated her entire life to studying new ways to control and manipulate Pluto's ecosystem for the better.

The war effort hasn't affected PDOB as much as the other departments and that suits the Botanist just fine; not even a war could come between her and her research. If a problem arises to distract her, she won't hesitate to nip the problem in the bud... even if that problem is an armed fugitive Earthling called Pablo.

The Funky Prophet is the ecclesiastical leader of Pluto and the head of PDOF (Pluto Department of Faith). One of the main roles of the Prophets of the Faith is to have prophetic visions and then interpret them according to space-time studies. Or in layman's terms; foresee the future with startling accuracy. The Prophet's most recently interpreted vision – commonly known as the 'monochromatic menace' – became one of the key arguments for speeding up the war effort. This prophecy also formed the basis for Pablo's abduction and imprisonment.

Ever since then the Funky Prophet has withdrawn from the public eye, dedicating his entire time to unlocking the hidden meanings of the prophecy. While he studies the cosmic secrets in the Cathedral of the Faith, the rest of PDOF prepares for the war, with an unwavering faith in the Prophecy.

The Funky DJ is the sound wave supervisor of PDOE (Pluto Department of Engineering). He is in charge of the Grand Theremin Engines and therefore effectively the highest ranking engineer of PDOE during the war. After all, it's the Theremin waves that both hurl Pluto across space and shield the planet from cosmic radiation.

The Funky DJ may be a touch flamboyant, but he is a true savant when it comes to harmonising the Grand Theremin engines, buying him a lot of leeway – leeway which doesn't hesitate to exploit, as he surrounds himself with the most hi-tech equipment Pluto has to offer.

The Funky Warden is the supervisor of Pluto's prison complex and the leader of the entire PDOC (Pluto Department of Corrections), Pluto's law enforcement arm. In this position, the Funky Warden is not only responsible for the safety of the public and the day-to-day operations of the prison facility, but he also supervises the entire surveillance network of Pluto.

The war effort hasn't softened the Funky Warden's edge, on the contrary; the moment martial law was declared, he introduced death sentences as a possible penalty for high crimes, such as treason. For an added effect, these sentences are carried out by complete matter disintegration as well as citizenship data history removal; this ensures that caught traitors are utterly wiped from existence, both from the physical world as well as the public data banks.

In short, the Funky Warden is not a nice guy to antagonise.

The Funky Warlord is the commander of PDOD (Pluto Department of Defence) – which means that during wartime he has supreme authority over all operations of Pluto. So, not only does the Funky Warlord organise and command all of the armed forces, but he also gives mandates to all the other departments to pursue.

Before the war the Warlord focused entirely on safeguarding Pluto via defensive measures. However, when word of the planetary demotion reached Pluto, the citizenship was outraged, demanding action to be taken. Still determined to look for peaceful solutions, the Warlord assembled a reconnaissance operation, trying to determine if this demotion was motivated by hostility or simple ignorance.

It remains unclear what turned the Funky Warlord from a proponent of peace to a fervent figurehead for an interplanetary war. Whether it was commitment to the Faith and the new prophecy or something revealed by the artefacts discovered during the reconnaissance mission, the Funky Warlord is completely dedicated to subjugating Earth...

...as well as wiping PDOR and Pablo off the face of Pluto! 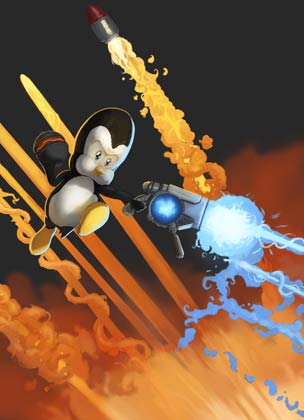