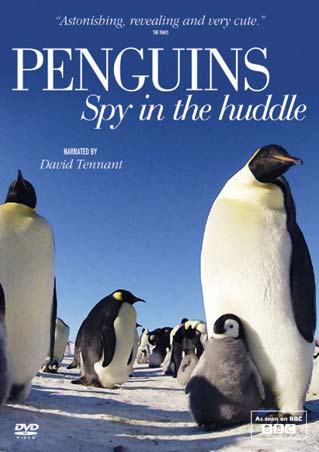 So here it is, the documentary I've hyped on our very front page; Penguins: Spy in the Huddle from BBC. Produced by John Powder Productions, the series spent nearly a year in the close company of penguins, deploying 50 spycams to capture as never before the true character of these birds. This is achieved via animatronic robot penguin cameras designed to silently infiltrate the colonies to record the penguins' behaviour.

Is it good? Hell yes! We get unbelievably splendid footage of penguins and their life, some of which revealed facts even I, a serious penguin-fanboy, wasn't aware of. We also can witness one of the most elaborate and cute spy operation launched by man, involving multiple robot penguins. Seriously, the robot penguins used to produce this documentary are so brilliant I'd love get one. For sure, I'd use them to do silly TAGAP-promoting YouTube videos, but hey!

But wait, there still something that needs to be mentioned; the whole thing is narrated by David Tennant. And not-so-surprisingly he does an excellent job with it; Tennant is no stranger to doing voice work and in fact his Doctor Who debut was Big Finish audio dramas. He also has since provided voices for everything from dragons to Jedi-teching droids, so yes, his narration is spot on. In fact I really would move to see more nature documentaries with David Tennant narration.

And on a final note; I bought this documentary three times. After I had pre-ordered it BBC launched a special new pre-order packs featuring two kinds of plush penguins (an adult and a chick Emperor penguin), so naturally I decided to buy two more, one DVD and the other BluRay. Those two will be featured in near future.