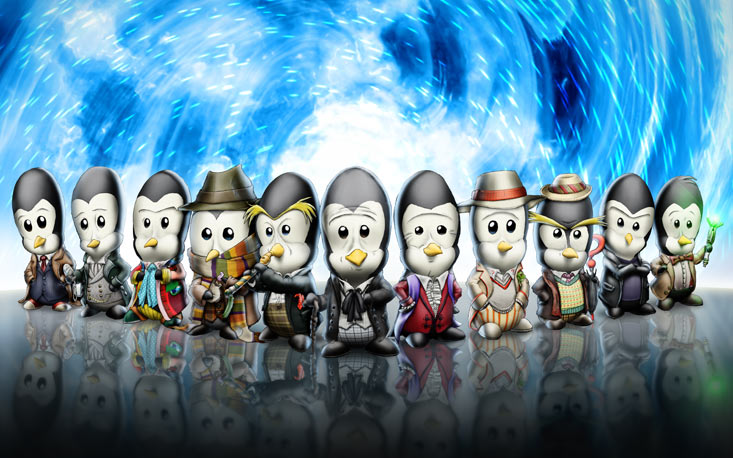 And here you were thinking we were done with BBC penguins. I admit, it was a ruse; here comes the most epic of them all!

Ever since the delightful cat-Doctor artworks by Jenny Parks, I've been asked by friends and strangers alike to create something combining my love for both Doctor Who and penguins. Knowing it would be time-consuming, I've never really jumped into it, but the 50th anniversary fan-fewer really got to me. So, here it is; all the Eleven Doctors as TAGAP penguins in an artwork simply called The Eleven Penguin Doctors.

I was right about the 'time consuming' bit; with my obsession for details this monster took over a week to complete. And I don't mean in 'few hours per day' way, but in the 'goodbye free-time and TAGAP 3 progress' kind of way. But it paid off; aside from TAGAPs, I haven't been this happy with any of my art in ages. As a funny side note, the workspace folder of this project is about 6.5 gigabytes and the original resolution of the imagery is gigantic enough for even a poster. Yes, I got carried away.

Those either entirely unfamiliar with Doctor Who and even those who've followed the resurrected series from 2005 and onwards might be a bit puzzled by 'who are these characters'? So, from left to right;

The artwork is available as wallpapers in great variety of resolutions and we even cooked up new set of buddy icons for you to use on Twitters, forums and the like. There's no better way to showcase your love for both the Doctor and penguins!

While we are sharing this artwork with all the fans of both penguins and TAGAP, this is really for BBC and Big Finish Productions, as well as all The Doctors, companions and their enemies; thank you so much for the fun and inspiration you've brought to my life. The Doctor's adventures are infectiously imaginative and the world would be a lot duller place with the 'madman with a box'.

So; thank you – and here's a toast for the next years in time and space!

And special thank you must also go to Heini 'Silveriatha' Liimatta – to TAGAP fans possibly best known as our guest artist – who got dragged along to another, even grander, related project that you'll be seeing soon enough.

If you wish to share this tongue-in-cheek tribute to other fellow Whovians, feel free to do so by sharing the permalink: