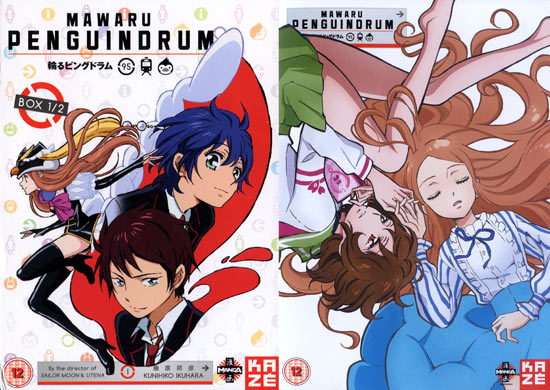 It's World Penguin Day and for the occasion, we're featuring a special bi-Weekly Penguin; it's our first penguin anime, Mawaru Penguindrum, a brilliant series from the acclaimed writer-director Kunihiko Ikuhara and produced by studio Brain's Base. The show, from which this is the first box set, is something I've been wanting to feature for a while now. However, as this was inevitably going to become the lengthiest Weekly Penguin post to date, I was saving it for a special occasion. You see, it's one of those shows that is pretty hard to describe in a way that both avoids spoilers yet does it justice – but I'll give it my best shot!

The story follows the three orphaned Takakura siblings, living together in their tiny house in Tokyo. To the horror of the brothers Kanba and Shōma, their sister Himari is diagnosed with an incurable terminal illness. And when Himari finally succumbs to the disease, while the siblings are visiting a penguin aquarium, all seems lost. That is, until a penguin hat, seemingly a harmless souvenir from the aquarium, becomes alive and miraculously saves Himari. There's a catch, however; Himari's death is only delayed and in order to save her proper, the brothers need to bring this magical hat something called 'penguindrum'. No-one knows what the heck it is, mind you, but they need to find it. And to help them, three absolutely adorable spirit penguins appear.

Yes, spirit penguins. There's "1", Kanba's sprit penguin, who is a tough bird with an eye for ladies. Then there's "2", Shōma's penguin, who is adorably clumsy fellow with a huge appetite. And finally there's "3", Himari's own girl-penguin who loves knitting and sometimes wears a blond wig. And the fourth one? She is "Esmeralda", but revealing anything further about her would be spoilers. All I'm going to say is that her intro is so brilliant you'd be forgiven to think that she's audition like heck for the next TAGAP villain role.

Oh, did I mention that these spirit penguins can only be seen by the siblings and not by anyone else? Yup, you guessed it, it leads to awesome comedic penguin moments! And it leads amazing mental gymnastics, too, when the human characters are having deep, emotional conversations – while the invisible penguins goof around with some epic slapstick.

Now, one could be forgiven to think that the penguins are here just to provide a running theme, giggles and lovable mascot material for branding, but that's not the case. The penguins in the show have a deeper purpose that you might miss, especially if you've watched only an episode or two. You see, the penguins act as symbolic caricatures of the siblings they are assigned to.

For example, Kanba is introduced as a philanderer with girlfriends-a-plenty. In any any other series this would mean that half of the show would be basically a "harem-anime", but in Penguindrum this is done more subtly. Kanba's girlfriends are only briefly touched upon and instead of the viewer being forced to suffer through comedic pervy routines so typical for anime shows, it is his spirit penguin "1" who is perving out. Seriously, when "1" isn't peeping at female butts, he keeps browsing local playboy equivalents, all the while looking tough and vocalising "Yup-yup!".

Speaking of symbolism, it is a running motif through the show. While it is set in the modern-day Tokyo, the series is so filled with clever abstractions that everything tips over to the surreal side – and not just because of the penguins and touches of supernatural. For instance, in every scene where there's a crowd – and in Tokyo there are plenty of those – everyone except the principal characters are represented by literal blank cardboard cut-outs. It works; it's the core cast we would focus on anyway! Other things are more subtle, but to quote a famous movie critic; "You might not have noticed, but your brain did". Unlike with many bad examples of anime of yesteryear, every piece of symbolism is both justified and clever.

Great deal of the mystery and surreal vibe of the entire series also comes from the narrative structure. The core story is linear – naturally – but it is bolstered with non-linear backstory flashbacks. And I don't mean non-linear in Pulp Fiction way; this is as if the writers took the back story, turned it into a 1000 piece puzzle and then sprinkled the pieces along the main storyline. While the core story progresses, the viewer is presented with weird glimpses that, at first, seem out of place. However, soon enough you are obsessively piecing together the full picture, only to presented with a new piece that makes you see everything in a new light.

All-in-all, Mawaru Penguindrum is brilliant, smart, thought-provoking, gleefully surreal and – thanks to the penguins – carries healthy dose of humour for contrast. My only wish is that if you decide to board the metro with the Takakura siblings and their absolutely hilarious penguin posse, commit yourself to the long run. It's a rewarding ride.

Should you watch it? Yup-yup!