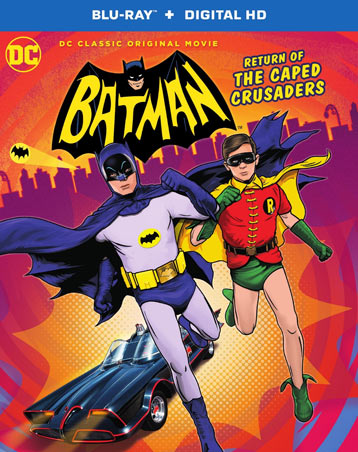 If you are a Weekly Penguin regular, you've surely noticed my love for DC's Batman – and particularly the legendary 1966 camp rendition of the character as performed by Adam West. So, late last year the show celebrated its 50th anniversary with a bang; a new animated movie Batman: Return of the Caped Crusaders, starring the surviving members of the cast; Adam West as Batman, Burt Ward as Robin and Julie Newmar as the Catwoman.

And it wouldn't be 60s Batman without his most popular foe, The Penguin. Sadly, the great Burgess Meredith is no longer with us, but a veteran voice-actor William Salyers does a brilliant job in re-creating the performance. Salyers is no stranger to us gamers, being likely best known as Mordin Solus in Mass Effect 3.

Return of the Caped Crusaders is a fantastic tribute to the Bright Knight (as West himself calls it). At first I was a bit worried about the modern animated style, but fear not, the entire experience feels authentic. So authentic, in fact, that had the show continued, I could totally see them releasing something like this as a sequel to the motion picture.

Also; both the Penguin's and Batman's gadgets are still awesome!