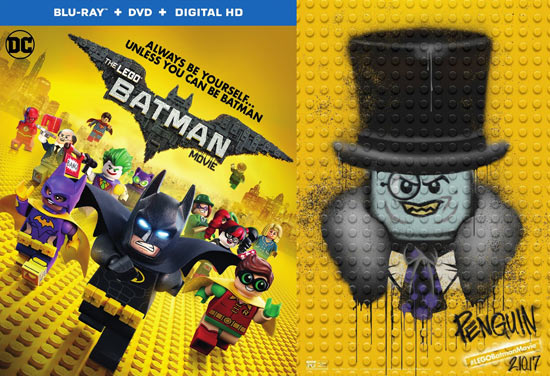 Oh, I've been waiting for this; It's The Lego Batman Movie! Not to be confused with the Lego Batman video games and movies based on them, this is the Lego Batman from The Lego Movie as voiced by Will Arnett – and a whole different plastic Gotham City. In fact, as Lego Dimensions game points out, these are two different characters.

While per usual I'm avoiding spoiling the film, I can say this is one of my favourite movies in a long time. It's both a love letter to all things Batman and, somehow at the same time, the ultimate deconstructive parody of a super-hero film. The story centres on The Joker (Zach Galifianakis) wanting to prove that he is Batman's THE nemesis – and doing this requires him to assemble the most sinister gang of villains of all time. And in all this, of course there is The Penguin.

So, what kind of Oswald Cobblepot are we getting this time? This brick version is clearly modelled after the iconic Batman Returns version as portrayed by Danny de Vito – unlike the previous Lego variants based on the original comic book Penguin. From the sharp teeth and pale skin to the rubber duck vehicle and hench-penguins, it's a clear homage. If I got it right, the voice is provided by the editor John Venzon, though he is listed under 'additional voices'.

There's one particular scene involving the Penguin that hits right home with us at TAGAP HQ. In the big opening fight, Poison Ivy tries to give her seduction kiss to Batman, but he keeps repeatedly blocking her with the hench-penguins. And as the kisses land on the birds, to show them being brainwashed, the penguins turn green.

I swear, if Lego decides to make this a set – or worse, a rare collectible – I can kiss my bank account goodbye.

To sum it up, I love The Lego Batman Movie. If you'd love to see a tongue-in-cheek tribute to the Dark Knight, this is just the thing. You can't help but to smile all the way through.