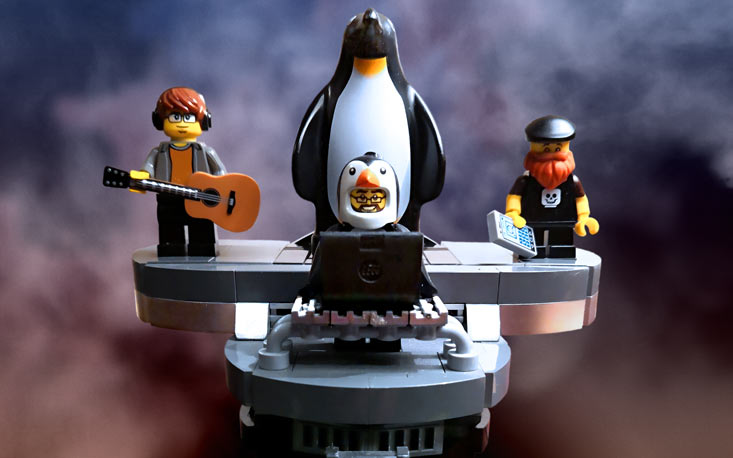 It's November 13th! It means tomorrow is November 14th and the first anniversary of TAGAP 3!

Whilst I originally planned to but together a special update for TAGAP 3, my personal schedule has been all borked in the recent months, leading me to have less time to put it together. I'm really sorry about that – but on a brighter note, yes, more TAGAP 3 stuff is in the works – in addition to that yet-to-be-announced brand new game!

Whilst we're light on actual TAGAP 3 stuff, that doesn't mean we won't be celebrating the occasion. So, behold; The "official unofficial" LEGO Penguin DT!

From left to right there's our resident composer Petja Heiskanen, yours truly wearing the penguin costume and our Facebook Primo Timo Liimatta. Built by me as a thank you to the team one during our 'launch party', only three of these exist. Unless, of course, you want to build one yourself!

Building this was a fun stress-reliever project during TAGAP 3 crunch. Everything is made of proper Lego bricks and the only 'custom' part is the paper label on the front, which is folded and clamped down by some flat tile pieces.

Parts used come all kinds of Lego families – including collectible minifigs, Lego Friends, Marvel Superheroes, Ultra Agents, Arctic and even Dublo! The base itself was first prototyped out of randomly coloured pieces from one of those Lego idea sets. Once I had done the shape, I re-did the design in Stud.io to design the colouring – and then I went to BrickLink to order all the parts needed.

With this, we say;

Thank you for joining the ride and a toast for more Penguin DT shenanigans in the future!