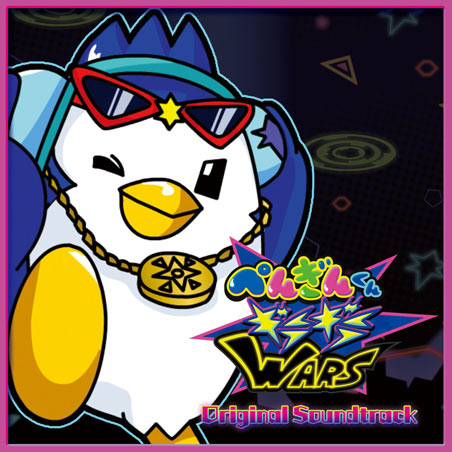 Since we're on the roll with the topic of Penguin Wars from City Connection and Dispatch Games, let's continue. Here's Penguin Wars soundtrack!

As I mentioned while featuring the game, the soundtrack is catchy as heck. If you watched our coverage or have seen any of the trailers, you might have caught an earworm yourself. The music comes from multiple composers for City Connection, but most prominently Takashi Okamoto. The album version spreads to two discs, the first one being the soundtrack and the second a meaty compilation of remixes and alternate versions.

In the game, as Riley the penguin travels to the GiraGira Land, he stops at various locations challenging their Gira Gira masters. Each location has it's own musical style. For example, the opening levels have a disco flavour, while the jungle has a very distinct house-electro vibe to it. One location, a seedy streets leading to GiraGira Land, is even backed by proper J-metal. As the album remains fun and energetic throughout, it manages to sound like a whole – despite the variety of musical styles covered.

If you're interested in getting the soundtrack, there are three ways to do so. If you are looking for the physical double-CD, head to your music importer of choice (i.e. Play-Asia or CDJapan). Just remember that the album could be labelled under the Japanese title "ぺんぎんくんギラギラ WARS" (Penguin-kun Gira Gira WARS).

For the digital album, Dispatch Games has it on sale on their Bandcamp page. OR you could get the Launch Edition of the game from Dispatch Games store – as of writing this entry, that edition is still available and it comes with a Bandcamp download code.