First time I really understood the idea behind concept art was in 1994 when I got my hands on book about making of Jurassic Park. While the book had plenty of interesting stuff, the most interesting were the pre-production concept art paintings. While some of them didn't look much like the final product, they still somehow managed to capture the whole essence of the film into energetic stills. After seeing those I understood how big impact one inspirational image can have on the whole production of a movie – or a game.

Fast forward nine years to late 2003. Back then TAGAP was bit of a mess; technology was coming along fine, but as far as gameplay went, I only knew it would be about penguins. Sure, I also knew what the penguins looked like, but the general direction was undecided. So I went back to drawing board, literary, and started creating sketches. A couple of drafts later I came up with something truly inspirational. It was simple; the hero penguin, with huge, smoking Uzi, standing in pile of shell casings. It summed up what TAGAP would be about; cute, vigorous penguin wielding big guns in world of intense action and violent entertainment. And yeah, you're right; this design later became the cover artwork of TAGAP.

Once TAGAP neared completion, I started doing similar designs for TAGAP 2. At the time I knew Pedro would be joining Pablo, but I originally planned to feature Pedro only in cut-scenes and in-game demo sequences, in all-scripted manner. But like before, all it took was one inspirational image define what TAGAP 2 would be about. And here it is – in its non-colored, pure pencil glory. 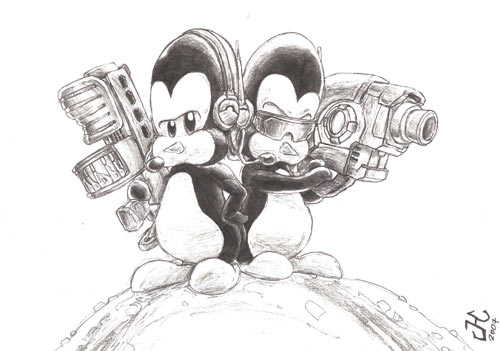 This image sums up many ideas behind TAGAP 2. The most obvious is naturally Pablo and Pedro fighting side-by-side; as we mentioned in our original press release, in single player campaign Pedro is always present giving air- and heavy weapons support, while in co-op play our heroic penguins finish the fight together. The second thing you'll notice is the amount of detail in penguins and guns alone. That's not just in this artwork, but in the game also. Hopefully I can show you some in-game screenshots to prove it sometime soon.

Does this become the TAGAP 2 cover art? Possibly, likely. I honestly don't know at the moment. Since we're still in pre-production, the cover artwork is one of the least of our worries 😅