Welcome to this week's TAGAP Thursday, taking a blog form this time. Having a brand new weekly feature has actually helped when it comes to keeping you guys up to date.

One thing that has somewhat hindered progress of TAGAP 2 has been the turmoil going on in my personal life. I won't go into details, but it's nothing dangerous, life-threatening, legal issues, bankruptcy or anything of the sort. Just life throwing wrenches into the works. Well, actually it hasn't slowed down TAGAP 2 itself that much, but I've had almost no time to cook up the bonus downloads and Weekly Penguins. But the issue was 'resolved' this week, so we're back in business!

Yep, it's getting closer and closer to being ready. Right now I'm in the middle of creating the extras content and cleaning up few remaining glitches from the to-do list.

Creating the extras has been a lot of fun. There really hasn't been a single level section, object or a character that hasn't been designed as concept art and thus, unlike with the first TAGAP, I have tons of material to work with. Granted, majority of the stuff, especially the level designs, are just a bunch of lines on draft paper, but there are still way more than enough detailed designs to create a comprehensive and interesting gallery with.

On that note, the long-delayed blog post 'Making of TAGAP 2: Design, Part II' has been rendered, well, obsolete. Right now the gallery has over 60 screen-fulls of designs accompanied by the final in-game versions for comparison. Naturally everything is topped with detailed descriptions. Here are a couple of examples of the gallery; 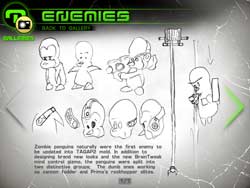 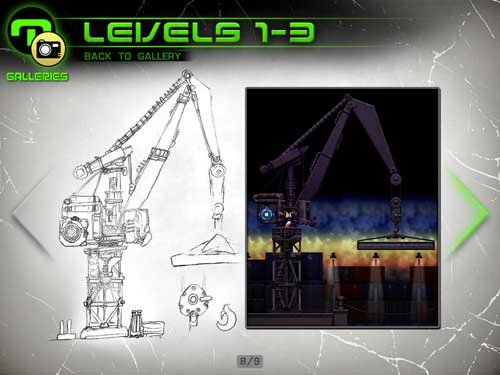 I've also been crafting the 'previously on TAGAP' re-cap for everyone who didn't play (or finish) the first TAGAP. Don't worry, you can skip it if you so wish. The narration has fittingly been provided by izrathedark of the "Let's Torture TAGAP" fame.

The recap cinematic has also been a true retrospective experience. In order to do the recap, I naturally had to capture the key moments of first TAGAP from the beginning to the very end – and all honesty, I think I haven't played first TAGAP in over two years. I was able to look at the game with fresh eyes and it was surprising experience in many ways.

On the positive side, I loved the level design. I'm not saying the levels in first TAGAP were better than those of TAGAP 2, but they are different. Great deal of it comes from the fact majority of first TAGAP takes place in-doors in borderline claustrophobic environments, whereas TAGAP 2 is focused on more open outdoor scenes.

On the negative side, it was a little tough to go back from TAGAP2 to the original. Everyone has always said, from kindergarten days, that I'm overly critical to my own works, but after TAGAP 2 I was almost embarrassed by some of the visuals. The gameplay also felt slightly limited, now that I've gotten used to Pablo sliding, double-jumping and tossing grenades.

All in all, even after TAGAP 2 the first game was still awesome to play, but it was also kind of a relief to realize how much improved the sequel is, in every way. Still, the point of the whole ordeal – summarizing the story of first TAGAP – proved the plot remains as delightful nonsense as ever!

As I already posted on the forums, TAGAP 2 won't be seen on Steam. We contacted Valve about the possibility and while they had positive things to say about the showcase we delivered, the game was turned down. While they have (the right) policy of not declaring why games are turned down from Steam, it seemed pretty clear from our conversation that the reason was TAGAP 2 being freeware and Steam being commercial.

I bare no grudge what-so-ever. On the contrary, I support their decision 100%; While it's a bummer that TAGAP 2 doesn't get to be on the biggest PC gaming service under the sun, if they had said 'yes' to TAGAP 2, there would've been billion other freeware games in the line waiting to add to their traffic without hope for Valve to produce revenue. This would ultimately lead into them loosing money with their commercial platform and as a gamer that's the very last thing I want to happen.

So, at any rate, thanks for Valve for considering us – and perhaps next time we have a commercial game to showcase :)

Thanks to the turmoils I mentioned earlier, I've had less time I can spend with The Doctor as well. I have had the change to listen only a couple of the audio plays (Time Works, Absolution and The Girl Who Never Was) and check out the latest DVD releases, Revisitations 2 and Mara Tales. The latter consists of two 5th Doctor stories, Kinda and Snakedance, from which the latter now ranks as my favorite Davison-story together with the absolutely fantastic The Caves of Androzani. I strongly recommend it.

Also, BBC has a special treat to all you who have been wondering what the heck is this 'Doctor Who' I keep babbling about; A 10 min charity special, in two parts. For free. On YouTube. See below who is this time traveling madman (with a box) who has stolen my soul;