As usual, multitude of things. Obviously TAGAP 3 is still the main focus and right now I'm working on Pablo's first proper space walk. And it's the complete experience with low gravity, magnet boots, space suits and nullified soundscape. While all these elements were relatively easy to implement – gravity modifications have been in the engine since the first TAGAP while FMOD can easily handle the sound EQ changes – the toughest part was to get the AI to act accordingly. Now the 'elites' of Pluto can also utilize low gravity and their magnet boots for high jumps, resulting in interesting air-ballet fire fights.

Also in the works is the complete website overhaul. When I designed the very first two versions of the site in 2007 my main goal was to create a TAGAP hub that could be read with any web-browsing device of the day, from smart phones to old-as-boots PCs. Thus I only used pure, manually coded HTML and restricted the content of the page to tiny 800x600 layout. And it worked as intended – and did it well.

But this isn't 2007 any more, it's 2013 and even the bloody smart phones and tablets run modern browsers and usually in HD even. There's no need to have 800x600 layout nor restrict oneself into workload-inducing pure HTML. So the complete website rewrite has begun, now with wide-screen monitors as the target and everything being based on CSS. This also means things like Twitter feed embeds will be returning, as well as possibly integrating (anti)social medias more to the proceedings. This will take a while, though; Every bloody page has to be manually rewritten from direct HTML code into layout-oriented versions and there are loads of pages. Heck, there are over 300 pages for Weekly Penguins alone! 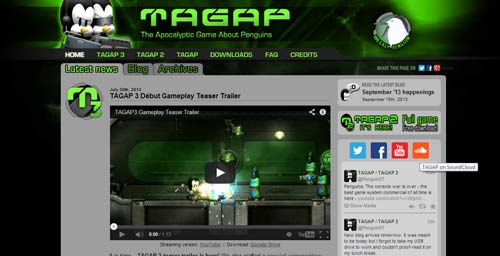 And finally I'm slowly but steadily started to recode the original TAGAP. It's no secret that the first game isn't a programming marvel, on the contrary, I'm first to admit it's extraordinarily poorly programmed. Don't get me wrong, I'm still proud of it as the very first game I ever published, but it's still stitched-together mess compared to the sequels programming-wise. 64 bit Windows 7 and 8 users can have a hard time getting the game to function properly and that's not good. At all. So I'm fixing things proper, recoding huge chunks of first TAGAP engine with bits from TAGAPs 2 and 3. Everything else taking the priority, the progress on this front is slow, but I'm determined to get the next version of the first TAGAP out this year. Once I've managed to clean the code up, it would be a great excuse to release the sources into the open-source wilderness. We'll see, flippers crossed.

Yep, the big boy, the fastest selling piece of entertainment ever; Grand Theft Auto V. I'm not too far into it – the three protagonists just got together for their first mission as a trio – but so far it seems like everything in the series has been amplified. While this means all the things I liked have been made better, some of the old annoyances remain. I want to be perfectly clear that the good out-weights the bad hundred times over, but the inherit clunkiness of 3D GTAs is still here. Hoever it is entirely possible I feel this way just 'cause my two previous open world experiences – Saints Row The Third and Sleeping Dogs – were very sublime when came down to minute-to-minute gameplay.

Still, the biggest strengths of the series – story, character, atmosphere and world-building – are all in the league of their own. Not for a single moment are you taken out of the 'Los Santos experience', this extending to the point the game has it's own version of the bloody Internet! No, I'm not kidding, from entertainment sites to stock market and online shopping, it's all there. Nothing is out of place in this world and everything, and I do mean everything, is there with a katana-sharp satire precision aimed at the world of today. Top it all off with a multi-threaded story that almost feels like you're swapping between episodes of something like The Sopranos, The Wire and Justified and you'll be getting your money's worth. My advice; Approach it as an action RPG instead of a super-smooth sandbox action extravaganza and you're all set.

As a geek I have to mention that I find the technological approach the game interesting. GTAV is, obviously, an open world which is streamed into existence. The problem is that the HD content takes so long to stream that you can't do it fast enough from the DVD, nor even the HDD; The data transfer rates of neither simply aren't up to snuff for the amounts of content we're talking about! Rockstar's solution? Force half of the game to be installed on HDD, while the other half still uses the DVD – effectively allowing the game to stream the data from two different sources simultaneously and thus by-passing the limitations. If you've wondered why Rockstar advices against installing the game completely, this is why; If all the data is on HDD, the advantage of multi-source streaming is lost and pop-in becomes more prevalent.

That's actually not the first time I've encountered the file transfer rates becoming a problem in the HD world. In fact, our very own TAGAP 3 announcement trailer isn't in 1080/60 because of that; Petja's hard-drive wasn't able to keep up with FRAPSing the game with those settings. I've been looking into alternatives for FRAPS, obviously, and encountered DXTory. It's very similar to FRAPS, only it allows splitting the file recording between multiple destinations – again by-passing the transfer rate issues. I've yet to give it a go, but it's used by many prolific game video journalists, including the famous YouTuber TotalBiscuit. If even DXTory fails, then I guess it's time to get a couple of portable SSDs and a video capture card.

While the wait for the 50th anniversary is overbearing almost, there are still cool Doctor tidbits to discus. I've been catching up with my Doctor Who audio backlog and now finally managed to listen to Peter Davison's mini-series for 2013. It was solid, good ride, with the exception of the last part, Prisoners of Fate. That one isn't good, it's one of the best I've heard in a while with one of the most interesting villains in not only Big Finish catalogue, but in the entire mythos in general. I was kind-of saddened that the storyline was resolved so well, I wouldn't have minded having the villain around for more adventures!

On another fun note, it was just announced that YLE will be, for the first time, broadcasting the anniversary special on time, in tandem with the BBC as part of their global 50th anniversary initiative. While it's cool and all, I find it amusing that the only time in history of time and space YLE is on time with Doctor Who, I'll be in London watching the thing on BBC.

Speaking of the 50th anniversary, I'm also planning to do something fun for TAGAP.net with the celebration in mind, but I won't go into details promising anything; With so much going on right now my schedule may not allow me to deliver. And nothing is worse than a promised birthday party that is cancelled in the last minute. Well, except perhaps appendix inflammation, trust me on that.