New enemies! There's never too many of those, right? While some of these won't be needed in a while, they've been 'locked down' to appear and after the month-long marathon of prepping the previous level, I decided to ease my future workload by creating a slew of these beforehand. Some of these are quite complex and this will take quite a while, but you have to do them sometime.

Some of these enemies are revamped classics, some are brand new and a couple even fall into the between. The one enemy that I've been documenting on Twitter falls the last category; The PDOD tank. Sure, we've had armoured tanks before, but this is something different enough to almost classify as a new enemy. Here's the current progress – about half of the vectors have been textured and shaded! 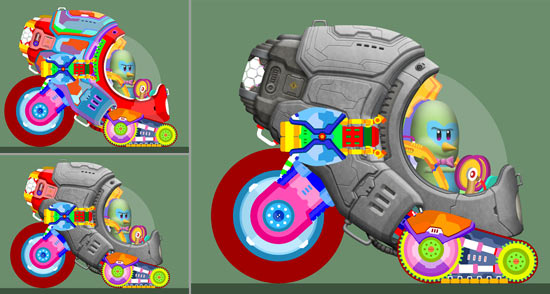 What about the returning classics, then? Well, there was one enemy I intended not to bring back; The turret dropper. While I really liked the enemy, I thought I pretty much perfected the balance of it in TAGAP 2 and there was nothing new I could bring to the table. But completely out of nowhere I came up with this intriguing way to approach it and the results could be very fun indeed. I'm not going into specifics, as you never know, the darn thing might not work as intended and I don't want to hype something that ends up on a cutting room floor.

Also in the works; HUD and UI improvements, including new way to handle level title cards and level insignias. Since the game is pseudo-Metroidvania in style with emphasis on optional-yet-rewarding backtracking, having informative and elegant title cards is essential. While this means 'less funny level titles', you'll now at an instant where the heck you are. Besides, we still have the achievements for the funny stuff 😄

Was it worth it? Heck yes, I loved it! Funnily enough, it shares the genre and lots of subject matter with my favourite game of 2013, DmC: Devil May Cry, but approaches things in a very different light. The setting is amazing, gameplay is fluid, audiovisual presentation is top notch and the story is great. I can't really say any more about the game without spoiling the best ending in the videogame history – that of the first Castlevania: Lords of Shadow – so I won't say anything more specific than that. Go ahead and play the first game, it's in the bargain bins by now, you won't regret it.

Lords of Shadow 2 is another example of how far I have drifted from the tastes of the mainstream game critics. As usual, I didn't check the reviews until I had finished the game, but after reading a couple I was left scratching my head and wondering if these folks played the same game as I did. This wasn't like with Duke Nukem Forever; While I like that game I can see and understand why great deal of folks hate it to the guts. But with Castlevania majority issues reviews complained about I actually considered as POSITIVES. I'm not bitter or anything, but the game developer in me wants to understand why this is.

But hey, I personally really liked the package. While it doesn't offer the definitive ending I was hoping for – it leaves just enough wiggle room for a sequel – it does wrap the major threads across the centuries. It's not necessarily the be-all-end-all game to cap the console generation, but if this indeed ends up being the last game I buy on day one for a very long time, I won't mind.

While I might be giving up on new games for a while, that doesn't mean I'll be running out of games to play any time soon. Now that the next gen systems have arrived, every store under the sun is clearing space for the systems by throwing the old games into sales bins. Seriously, if you are a console gamer and like your older systems, now is the time to hit those online retailers. For example GAME.co.uk has some insanely good sales going on in Xbox 360 and PS3 departments – I've picked quite a slew of games for 6 GBP brand new.

And this means all those games I've been on the fence about buying are now 5 to 15 EUR tops, resulting in my backlog growing enormously. New entries include Of Orcs and Men, Deadfall Adventures and Fuse, to name a few. And those are on top of all the other games already in the cue.

And right now in the playlist; Lego Batman. Yep, all those Weekly Penguin entries gave me an urge to replay these, in solo play this time. Not to mention I've still yet to finish Bodycount and Fallout: New Vegas (60 hours in, three DLCs down, the last one and the game's actual ending to go).