Last year you got a sneak peek at a level set within PDOF, the Pluto Department of Faith. And in that screenshot, there was a giant billboard featuring someone called The Funky Prophet. Well, here he is!

The Funky Prophet is the ecclesiastical leader Pluto and the head of PDOF (Pluto Department of Faith). He is the seventh in the line of prophets to hold this position. Where many of his predecessors focused in advancing the Faith either as a scientific study or as a philosophy, the Funky Prophet the 7th strikes a balance between both the aspects. This has made him very popular, being praised as 'level headed' amidst the chaos of impending war. 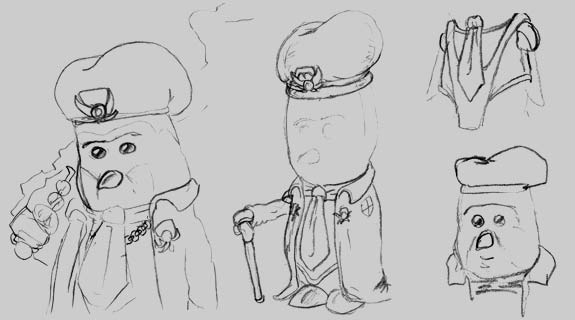 One of the main roles of the Prophets of the Faith is to have prophetic visions and then interpret them according to space-time studies. In other words; The Prophets make predictions of the future and more often than not, these predictions are accurate. In that light it is not hard to imagine how the Prophet's most recent interpreted vision – commonly known as the 'monochromatic menace' – became one of the key arguments in speeding up the war effort. This prophecy also formed the basis for Pablo's abduction and imprisonment, leading into the events of TAGAP 3.

Ever since the afore-mentioned Prophecy, Funky Prophet the 7th has withdrawn from the public eye, dedicating his entire time in unlocking all the hidden meanings behind his vision. While he studies the cosmic secrets deep within the Cathedral of the Faith, the rest of the PDOF prepares for the war, with unwavering faith in the Prophecy.

PDOF, or Pluto Department of Faith, is the spiritual centre of Pluto society. The sole concern of PDOF is the government, promotion and further development of The Faith, Pluto's official belief system.

The Faith started as a shamanistic practice at the dawn of Pluto society, relying on hallucinogenic dreams and prophecies. Now these primitive, belief-based practices have evolved into an empirically provable science of understanding and benefiting from the flow of space-time and cosmic causality. What results is a body of beliefs that is a mixture of spiritual practice and actual science; While as a philosophy it gives pointers to better living, it is based on advanced cosmic studies.

The Faith lends to all waddles of Pluto citizens, though of course not everyone goes for it. While select few become devoted students of space-time flows, most followers of Faith remain Affortuned, simply applying the philosophical tenets to better their lives and the lives of those around them. And for everyone following these tenets – known as necesses – the interpreted prophecies of the current Prophet are taken as granted.

I could go on-and-on about the 'Faith' itself. In fact I could dedicate an entire blog post to the subject. The creation of a new, unique religion was one of the toughest writing / design jobs I've ever had. It took me quite a while; The concept, way it works as a philosophy, how it works within Pluto society, the artwork it inspires, all of it. Since the Prophet is such a pivotal character in getting TAGAP 3's plot moving, I wanted to create a belief system that could be seen as believable in the context of the game.

And I completely agree; It's all an overkill considering TAGAP 3 is still a silly 2D shooter with penguins. On a plus side, with characters and all the backgrounds this refined, the character dialog practically writes itself and there's no shortage of well-thought-out fluff text to flesh out the world!

Right now, I'm hard at work on a very special thing; The final in-inventory weapon in Pablo's arsenal! This is pretty much our 'BFG', the cool big gun that tops your weaponry, so I'm not going into too much detail on what this thing is.

What I can describe is the technical challenges I've had in bringing this weapon into life. The biggest hurdle required me to re-work a big chunk of how TAGAP Engine handles weapon slots. See, you won't just 'get' this weapon as a pick-up or as a plot point. No, you have to work for it a bit – the weapon is split into multiple components you have to discover in order to unlock it. And of course I had to rework the weapon system to accommodate this.

By the way, the tech modifications within the engine were the reason why I haven't created this weapon until now. For example, there was really no point in even starting the work on the weapon before the progress-tracking and save game system were fully functional, supporting persistent collectible tracking like this. And of course, the places where you discover the components weren't in place before now. That said, this weapon has always been part of the design, just waiting the right time to be implemented.

I know it's mean to talk about a new weapon without telling what it is, but rest assured; It has some of the coolest in-engine effects I've created thus far and you shouldn't be disappointed. We DOOM-fanatics ❤ our BFGs!