The first one is the project Classic TAGAP – the new TAGAP and TAGAP 2 re-releases coming on July 31st. The basics are now all there – both games run smoothly on modern systems, using the same exact in-engine wrapper code for smooth re-scaling and post-processing.

Speaking of post-processing; TAGAP and TAGAP 2 rely on the game being rendered in fixed 800×600 resolution – and it can't be easily changed. Well, I CAN chance it, but then you will see plenty of graphical artefacts that weren't there before. And the only way to fix those would be to re-create majority of the game assets and automatic texture generation code – which would slowly turn the project from a remaster to a full-on remake.

So, instead, Classic TAGAP games now have multiple upscaling options to choose from;

Here is a quick side-by-side comparison using TAGAP 2 menu. The screenshots are zoomed in 200% to better showcase the differences. 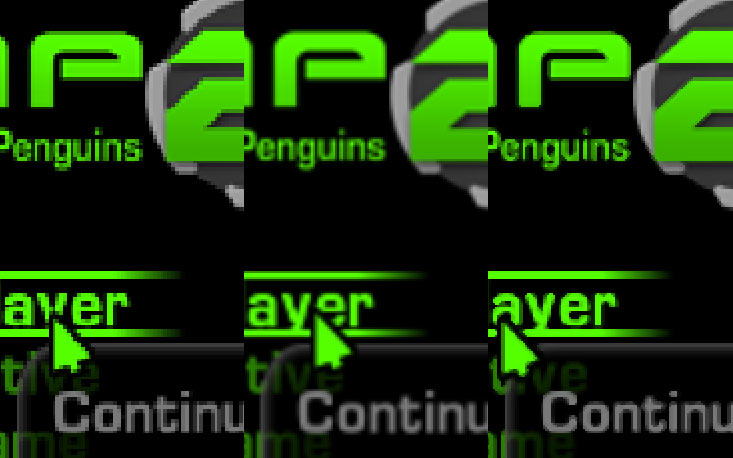 Second thing I'm working on is naturally the 'next project'. Since most of the work on Classic TAGAP is 'heavy-duty' programming, at this time I've focused my work on the next game to art assets. Right now I'm working on the sprites for some of the key characters. And being key characters, I need to create both the 'side' and 'front' versions of them.

And the third thing I'm working on is the complete TAGAP.net re-write. And that is a complete re-write.

The new TAGAP.net will be unleashed soon after the T-Day. While I'm aiming the new site to be ready by the T-Day itself, I think it'll be better to play things safe. As in; not to launch three products at once – two games and the web platform hosting them. So, as soon as the Classic TAGAP has been launched safely, the website shall re-generate!

Yes, 'The Christmas for Geeks' is here again! This year I went in with just one thing on my mind – getting a release date for DOOM Eternal (November 22nd, by the way). Everything else revealed was just a plus. So let's roll with our annual Top things from E3 wrap-up!

Heaven vs. Hell vs. DOOM Slayer. I mean, what else do you need to know? Bring it on!

Super-happy to see Darksiders franchise going strong, expanding to a spin-off from Airship Syndicate, aka folks behind Battle Chasers (which was based on a comic by the creator of Darksiders). It really seems that being a chaotic neutral force of nature trapped between the battle between Heaven and Hell seems to be my go-to thing.

From Shinji Mikami's Tango Gameworks, Ghostwire Tokyo promises to be a surreal action-horror romp set in an aftermath of what seems to be a rapture-esque catastrophe. The studio nailed the 'surreal horror' themes with their The Evil Within games, so I'm really curious to see where this is going. Plus, Tango creative director Ikumi Nakamura's genuine excitement to share her game with the world was infectious.

Imagine a love-child of Turrican, Contra, DOOM and Warhammer 40k. Now cover that child in heavy metal. What you have is Valfaris, from the creators of Slain: Back From Hell. Whilst I remember seeing the project announced, I wasn't aware of how amazing it's shaping up to be. Definitely the surprise tour-de-force of this year's E3.

One of the craziest and thematic open-world action games of the PS2 era returns in a remake. The reveal trailer definitely grabs the 'best use of music in a trailer' reward. Also, whilst I usually want to hear the original voice actors reprise their roles, if Till Lindeman actually voiced Crypto, you'd have zero complaints from me.

Character driven tactical RPG set in the Mob world of 1920s? From John Romero? Sign me up!

Other bonus highlights include;

Playlist is a regular feature in our Penguin DT blog; a chance to highlight cool games both old and new that I've been playing. As always, I believe that in order to make games, you need to play them, preferably with a broad scope when it comes to genres, so each day I dedicate at least an hour to actually playing games. The rest of the free time? There is no such thing, it all belongs to TAGAP!

One short word: RAGE. Oh, and the number '2'. All hail our id Software overlords!

Did I like it? Well of course I did. Using z = x + y method of explaining things, Rage 2 is what you'd get if you had the original Rage done in the style of Avalanche's open world games and with the main combat loop similar to DOOM '16.

The last part is the most important bit; this really feels like an id Software shooter, only about twice as fast. No, I'm not kidding – you have nano-machine-based super-powers that let you zip around like the Flash, resulting insanely fast combat. There were moments I rolled through an enemy outpost with such tempo that the gibs hadn't hit the ground before I had rip 'n torn through it.

The only real criticism I have towards the game is how bloody over-powered the player becomes towards the end. Fully upgraded and armed with gravity darts, even on harder difficulty settings the game becomes a cakewalk. Don't get me wrong, having a super-powered protagonist is great – just watch DOOM – but you have to have a challenge to use those powers against. And Rage 2 really doesn't have that towards the end. In the beginning it does, but it goes away in the end-game.

Then again, that could be my own fault, me being the numbnuts who explores the whole map and finds all the upgrades. If you don't, perhaps the challenge remains.

So yeah, Rage 2 is well worth a spin. It's light on content for an open world game, but the content that is there is so high-octane and exhilarating that perhaps that is for the best. If you are looking for a fun shooter whilst waiting for DOOM Eternal, Rage 2 is an excellent pick. Even if you don't like open world games, the mad-fast combat loop is well worth experiencing.

After that? Finally finishing Yooka-Laylee by Playtonic. This has been on my to-do list for ages, but as the game is darn huge – larger than most open-world games, I'd argue – I've never allotted a time slot for it. Besides, it sure makes a nice contrast to the super-brutal bloodbath of Rage 2.

As a closing note – in case you missed it – long-time TAGAP fan Poison Sleeper created some amazing 'First TAGAP' fan art, available as a wallpaper. Huge thank-you for the artwork, Poison Sleeper! Do give a peek of his VK page for more. 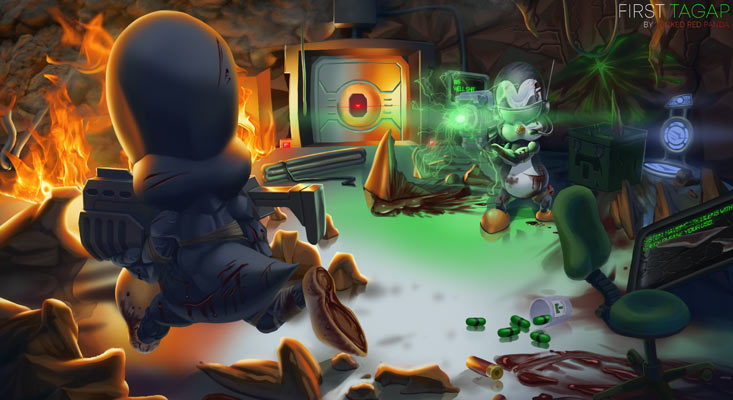 On development front, finishing touches to the project Classic TAGAP, with additional testing to ensure TAGAP 2 co-op handles well after the jump from DirectInput to RawInput. Meanwhile, the production on the new project and website continues.

On games front; the Limited Run Games version of Bloodstained: Curse of the Moon arrived last week, so after wrapping up with Yooka-Laylee, that'll be next. After all, the main course Bloodstained: Ritual of the Night is just around the corner. Oh, I've been waiting for this!