As it has been a custom here at Penguin DT HQ, on Christmas Eve we release new media and screenshots. That will be so this year, too – except in a lot bigger way. You've likely already guessed it;

It's only fitting, considering it is a Tuesday – and therefore a Weekly Penguin day.

ICYMI, for the second anniversary of TAGAP 3 last month we released the very first screenshot from TAGAP 4: 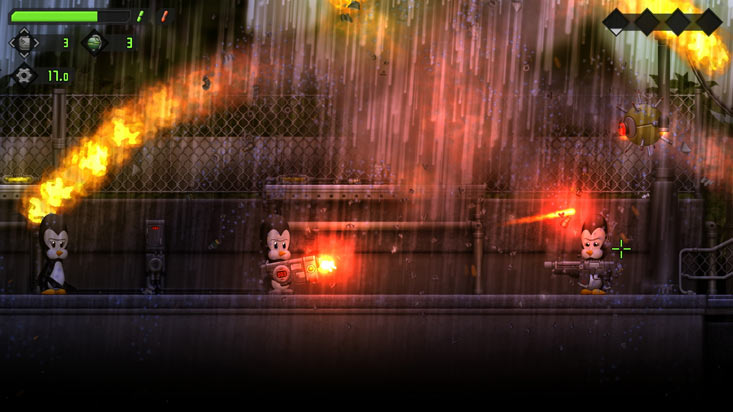 This screenshot is real gameplay from the very level you'll be seeing in the gameplay trailer later this month. Since seeing this in motion is so short a while away that I won't spoil it by over-explaining this shot.

However, I can say that there is about twice as much going on in terms of rendering than in a full level of TAGAP 3. The new lighting engine, masked reflections, new particle rendering systems, cross-blended rain effects... yeah, that's quite a lot. And looks even better in motion 😉

Three things – making final optimization sweeps to the TAGAP 4 engine prior to recording the gameplay demo, prototyping a new level and creating background art for that said level.

From these three, the optimization sweep isn't something that is highly necessary. As I've mentioned earlier, TAGAP 4 runs almost twice as fast as TAGAP 3 as it is, but I'm taking this demo deadline as an excuse to optimize it further. In practice this means scrubbing through the entire engine code base, removing all the unused stuff from the previous engine iterations and fine-tuning what is left.

The new level is something that is coming along pretty fast. I'm not going into any details on it, except that it is the very next level to the one you'll see in the gameplay reveal on Christmas. Creating the backgrounds for the level has been challenging, but mainly because I've been reprogramming the background parallax entity rendering routines as I go. The new system is more accurate and allows for more dynamic elements. For example, the global lighting directly affects the weapon animation modifiers of the background entity. This means you can animate the entity-based parallax layers based on, say, lighting strikes. In layman's terms; multi-layered parallaxes will look even less static.

One more thing in the works – but not by me – is obviously the soundtrack. Petja is hard at work creating the first in-game tunes for the game, including the score you'll hear in the gameplay demo. He is currently experimenting on a new kind of way of composing and recording. Even though the stuff currently ready is a bunch of demo recordings, his new way of approaching the process makes the score sound really fresh and different.

Can't wait to hear your comments on the whole thing when the gameplay trailer is unleashed on Christmas!

Playlist is a regular feature in our Penguin DT blog; A chance to highlight cool games both old and new that I've been playing. As always, I believe that in order to make games, you need to play them, preferably with a broad scope when it comes to genres, so each day I dedicate at least an hour to actually playing games. The rest of the free time? There is no such thing, it all belongs to TAGAP!

It's been ages since the previous Playlist update, so long in fact that I had to go back and read what I was playing at that time. So, since then, I've completed two quite large games – The Sinking City and The Silver Case – and I'm currently in progress of completing a third, Just Cause 3. If you're wondering why I haven't played Death Stranding or Valfaris yet, that's because of the Finnish postal strike – I didn't get my copies until this week.

The Sinking City is the other big H. P. Lovecraft game that has been in the works for ages. In fact, it started out as THE official Call of Cthulhu game for Focus Home Interactive. However, the game shaped out to be different from what the publisher was thinking, so they parted ways. This resulted in The Sinking City getting that new title and Cyanide developing Call of Cthulhu – which was both mine and Timo's GOTY for 2018.

This development history gave me a pre-existing idea of how the games would turn out; I expected Call of Cthulhu to be more like Sandy Petersen's RPG and The Sinking City to be more like the source material by H. P. Lovecraft. As it happens, the situation is completely reverse – where Call of Cthulhu was Lovecraft made digital, The Sinking City feels more like the RPG. What I mean by that is that it the game uses the mythos and lore more for a surreal setting, as opposed to more intimate descent to madness.

Whilst I liked Call of Cthulhu more, The Sinking City is an excellent game, too. Though it borrows more from the survival horror game tropes, the investigation system in it is top-notch, forcing you to figure things out for yourself – as opposed to following HUD markers and choosing-your-adventure through lists of options. That goes surprisingly long way into making you feel more like a private detective and not just a character following a script. This is enhanced further by how each case you take up on can have multiple outcomes based on your deductions – creating whole new branches of narrative and investigations. Good stuff.

The Silver Case by Grasshopper Manufacture was a surreal experience as well, on more levels than one. For starters, it is not a 'game', not really. It's closer to a visual novel, only with more layers of interactivity than what you'd typically see. It's also one of the break-through games for the great cult meastro Goichi 'Suda51' Suda of Killer 7, Killer is Dead and No More Heroes fame.

At its core the story is a murder-mystery tale set in Japan of 1999, in the fictive city called 24 Districts. Most of the cases revolve around an infamous serial killer Kamui Ueahara, someone thought to be dead for a long time. You play as a new recruit in the 24 Districts Police Department, solving crimes both directly and tangentially related to the main case.

I haven't played a visual novel styled experience before, but this one certainly delivers on the 'visual' front. The game uses an interesting blend of anime-styled animation, interactive 3D scenes, comic book still frames and even live action footage to tell its story, making every episode of the take feel unique. That, plus the soundtrack composed by Masafumi Takada is fantastic – and has been carefully remastered for the modern re-releases by the one-and-only Akira Yamaoka.

If you're into visual novels, do check out The Silver Case. Also, if you're into Suda51's other works, you might want to give it a try, too – the cult hit Killer 7 takes place in this very same setting.

On gaming front; so many games to choose from, but I'll guess it'll end up being a battle between Valfaris and Death Stranding.