We'll take this day as an excuse to introduce you to one of the new, super-charged enemies of TAGAP 4 – the Cyberpenguin. 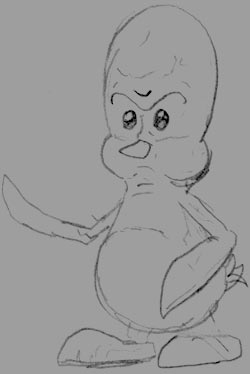 The concept of the Cyberpenguin was a case of gameplay evolution. As Pablo is now twice as fast and the gameplay twice as frantic, the old-school enemies would need some serious overhauls to become legitimate threats again. So, when it came the time to design the comeback form for the Super-Zombie Penguin from TAGAP and TAGAP 2, it needed some serious upgrades.

I started with the base design – a roided-up version of the TAGAP 4 zombie penguin. I first thought that perhaps if I just make it faster and give it a dash attack, perhaps that'll be enough? However, I really liked their TAGAP 4 equivalent, the Cyber-funky. Unlike the bullet-spongy Super-Zombie Penguin, Cyber-Funky had their own weak point, allowing the player to take them down fast if their aim was good enough.

So I decided; let's properly 'upgrade' the Super-Zombie Penguin with cybernetics! Thus the enemy went from a bullet-sponge to a bullet-sponge with a weak-point and electrical attacks, both dash and AOE variety.

For the visual design, it's combination of the classic Super-Zombie Penguin and the Cyber-Funky, all as filtered through the design language of TAGAP 4. For an additional touch, I did some research of how to make the enemy look 'steroided up'. There's so much you can do with added muscle tones before it no longer looks like a penguin, but as it turns out, one of the potential steroid side effects is something nicknamed 'roid gut'. Google up 'Big Lenny' at your own risk if you want to see a reference. Thus in the final version, there's the mix of bulging belly and hard muscle tones.

On the closing note, I really dig how this enemy turned out – an original enemy resulted from upgrading a classic one with cybernetics and electric AOE attacks. In other words, an enemy everyone can look and say 'wow, you can make enemies without ripping them off from DOOM arch types!'.

Then DOOM Eternal happened. And it has Dread Knights – a classic enemy upgraded with cybernetics and electric AOE attacks. Oh well, at least I can once again say to myself that at least I came to the same design decision as my all time fave development studio, right? 🤣