The first two TAGAP titles were released on July 31st, making it our very own TAGAP Day. And in 2022, we're having our 15th anniversary of apocalyptic penguins!

So, first things first; have you seen the double announcement trailer already?

The music you hear in the trailer is indeed TAGAP 4 theme song by Petja Heiskanen, this time aptly titled as 'Theme 4 TAGAP'. The song is available now both on SoundCloud as well as YouTube:

The artwork featured in both videos is indeed the final cover art for TAGAP 4, by yours truly. Here it is in the full 4k glory to decorate your desktops:

This trailer focuses on Pablo's new weapon, the AMM-01 Weapon System. I'd best sum it up as a love-child between the Aliens pulse rifle and Dredd's Lawgiver.

A small, calmer showcase of new environments – some completely new, some totally re-imagined from the world of the original TAGAP.

A quick tease of Nemesis boss fights, as I don't want to spoil these. You'll have to be on your toes around this guy!

AMM-01 can be upgraded at the Weapon Upgrade stations. Some upgrades affect everything, whilst others unlock new specific firing modes.

You start with the Plasma Core as the firing mechanism, which is for pure physical damage.

Swap in the Frost Core and you can freeze enemies or deal more damage to organic targets. And the frozen enemies can be Cleaved for Health.

Swap in the Electro Core and you can deal with robots and electronic targets with ease – either by dealing more damage or by shocking their system.

Oh yeah, haven't mentioned this one, have I? Later in the game you can indeed install an extra barrel to AMM-01 for double firing rate and double-barrelled firing modes! I mean, you don't have to, but you'll really want to.

Naturally AMM-01 can fire OMG rounds, why wouldn't it? And yes, a double-barrelled OMG-10k is a thing. Ka-boom!

Pablo interrupts our regular programming with a special announcement. This is the second in-engine cut-scene I've ever made specifically for TAGAP trailers (the first one was the computer start-up sequence for the TAGAP 4 teaser all those years ago).

Yes, the 'Old Game Plus' pun is how the new game mode got started. I'm not kidding: I was thinking what kind of extras I could implement on a short time-table and was thinking of 'new game plus'. It didn't feel necessary for such a short game, so I thought, 'what then, old game plus? At first I chuckled... but now we're here.

Seems familiar, doesn't it? Crispier than before, but very suspiciously familiar.

The intro sequence of TAGAP+ is shortened here for the trailer, but it is full length in the game, fully remade in the new engine.

Yes; Old Game+ is 'TAGAP+', a full blow remake of the first half of the original game! At first I thought I'd just convert the levels into TAGAP 4 and leave them as-is. However, the texture polygon data was in such a different format that it was basically useless, needing a full re-do. So I did the re-do... to EVERYTHING.

Level 'Warehouse', near the end of the first very first segment of the original game.

The infamous elevator scene of 'Going Up' becomes more interesting when you have slow-mo-on-demand.

A quick shot of the lobby shooting scene is actually a great testament how much faster the new engine is in comparison to TAGAP 3, having mass fights with all these details without a hint of slow-down. Or I should say 'unwanted slow-down', as this is TAGAP.

The faster gameplay turns even the early-on level 'Quantum Ruins' into a frantic action set-piece.

And blam-blam; Two more reveals – the cover art and the release date! Mark your calendars, people.

A new trailer, a new excuse to grab some new screenshots to feature! 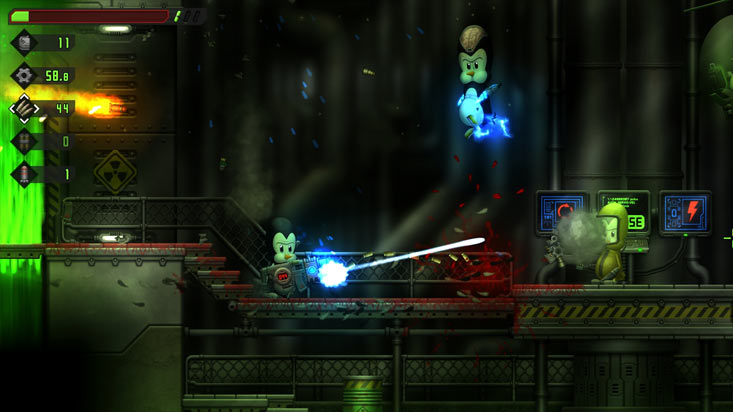 And since we're also featuring TAGAP+ for the first time, here are some comparison shots between the scenes in the trailer and the Classic TAGAP originals.

And that's about it for TAGAP Day for 2022, I hope you liked what we had to show this year! And stay tuned for more regular TAGAP 4 updates as the release date approaches!

It ain't over until the release date is behind us and there is still work to do. In addition clearing the 'known issues' list and working on further balancing, we're approaching that time in the dev cycle; the voice over recording! This will be fun as always!