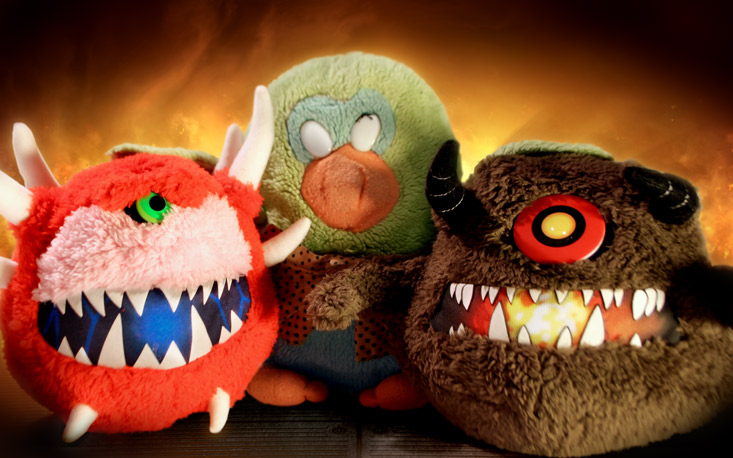 Yep, while everything this year was sonic-focused on the 50th anniversary of Doctor Who, another hugely important anniversary takes place right now; Today one of the best computer games of all time, id Software's DOOM, turns 20 years old! And I know, I just made all of you who remember playing the game back in the day feel really old.

And what would be a better way for us to celebrate the occasion than letting DOOM demons and my personal hero, the Funky Penguin, join forces for a photo shoot! You know, this picture pretty much sums up the DNA of TAGAP; Without the Funky Penguin I likely wouldn't be this madly obsessed with penguins – and without DOOM I likely wouldn't be this passionate about computer games.

You see, prior to being introduced to DOOM I was pretty much a casual gamer. I did play and enjoy my Super Marios and all those C64 games, but really they were a side-attraction. Then I played DOOM and everything changed. And it changed more than just my passion to play games; While I didn't actually create any self-made game content until Duke Nukem 3D and Quake came around, the first game designs I ever made were plans for DOOM mods.

So, thank you id Software and all the great ones who have now moved to other projects – John Carmack, John Romero, Tom Hall, Sandy Petersen, Bobby Prince... and everyone else involved in bringing DOOM to life! I also have to give extra special thanks to Bethesda and GamingHeads for producing these absolutely adorable Cacodemon and Pain Elemental plushies!

As a side note; While this is pretty epic a wallpaper, this wasn't that 'specific epic one' I've been teasing these past weeks. I've now re-scheduled it to be the grand finale for 2013, for December 31st. But hey, the two in between will be pretty darn great, too!