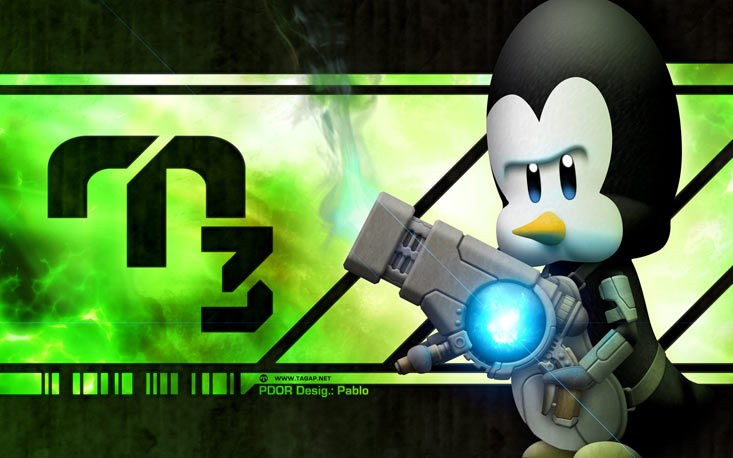 Well, here he is; our very own Pablo in his very first official TAGAP 3 wallpaper! It's been too long since Pablo was featured on this Weekly Penguin arena, isn't it?

When I started to think what the character wallpapers for TAGAP 3 would look like, I started by looking back at all the TAGAP 2 stuff. We had two sets of T2 character spots, the original 'grunge' versions and the 'stylized' cut-out versions, and I liked them both. While I wanted something similar, the look of TAGAP 3 is a lot cleaner than that of TAGAP 2, i.e. more shiny areas and a fewer worn-down and abandoned places. So the grunge wasn't the way to go, but how about a combination of the two styles? I doodled a couple of mock-ups and they worked so well I went and finished the wallpaper in one sitting!

But what about Pablo himself? Well, for starters, this is indeed based on Pablo's in-game sprite so yes, he is this detailed. And yes, he is indeed wearing sci-fi armour. This armour is essentially a health upgrade system which you can obtain piece-by-piece throughout the game. Some parts, like the boots, actually give you special abilities as well.

Obviously Pablo's own artwork is available as a full range of wallpapers. Also now in wallpaper form; the concept designs for the TAGAP 3 title screen – for more information on those check out our brand new blog entry.

So, Pablo wishes you Happy Holidays, penguin- and TAGAP lovers!