Welcome to Holiday 2013 blog post! As usual, we released a slew of new TAGAP media to brighten up your holidays. So, without further ado;

This new screenshot is something that was actually asked for by fans via social media; TAGAP 3 taking place in space, why haven't we shown a glimpse of more space-y stuff yet? Well, the answer to that simply was; Because those portions weren't ready yet. At the time we recorded and edited the début trailer I had just started to draft out our very first low-gravity space map and we had nothing finished to show off. But half-an-year later that has obviously changed!

So here's a glimpse of space battles between penguins! 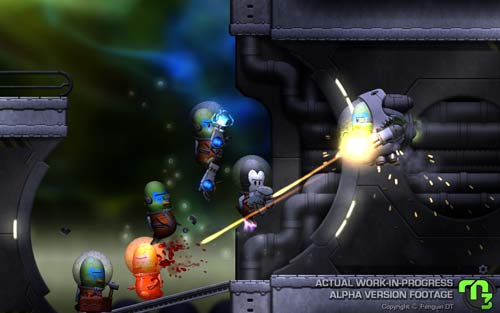 A couple of things to take in from this scene;

To celebrate the holiday and the year 2013 in general we just rolled out our very first official TAGAP 3 wallpapers!

But the other one is a different case. While it may look like a promotional piece – and works pretty great as one – it's actually CGI concept art. Yep, for TAGAP 3 I've doodled some all-CGI concepts and this one is, obviously, for the title screen. Even though it may look like a 3D render, it is not; It's all Photoshop, all 2D vectors. Well, vectors and several dozen filters and effects used as the plasma explosion.

When I was bringing concept to life, it changed a bit. Between the concept and the actual implementation I had created the sub-space vortex effects. I liked them so much that instead of having a perpetual plasma explosion, we now have the winds of the vortex cracking the screen and sweeping the shards away. Still, all the assets of the sequence were adapted directly from this particular piece of artwork.

By the way, if the description of the title screen sounded familiar, it should; The actual title screen wraps up the TAGAP 3 début trailer!

A whole new level! This is something different, both in comparison to the other finished levels as well as in terms of the design method. This one was designed entirely as abstract physical shapes, play-tested as such until it felt great and then finally texture-mapped to look like a real place. While this is the order things almost always for us – shapes, textures, enemies – I usually have most of it designed before I even launch the TAGAP Editor. But not this time; The textures were designed over the physical landscape instead of planning the scenes out as a whole.

How is it working so far? Pretty well, actually. The level feels very organic and I'm fairly sure you won't be able to tell which level I'm talking about. While the results of this experiment were great, this was very time-consuming; Having a full design from the get-go makes the entire design process a lot faster and smoother. While we likely won't be doing another huge level entirely by this method, I'm not ruling out doing short special segments this way. We'll see.

The Next Weekly Penguin

While that's it for now, we have one more treat in store for 2013. The last day of the year happens to be another Weekly Penguin tuesday and it'll be something really special. In fact, it just might be the greatest Weekly Penguin to date, at least to me on a personal level. Unless my ISP gets a heart attack during the holidays, feel free come and witness more penguin greatness on December 31st!

Have a peaceful holiday!