TAGAP Thursdays is a great excuse to do something that is basically a tradition by this point; Obligatory Menu Tour!

Back in TAGAP 2 days it seemed like every game had this nearing the launch, but in the current year it seems we're one of the last remaining goofs still doing it. So let's keep it up, shall we?

Importance of a good main menu

In my mind, having a clear and understandable main menu is almost as important as the in-game UI and controls. This may sound weird – most people don't consciously think about the main menu. After setting the controls to your liking, you just hit 'start game' and be done with it.

However, the menu does have a big impact on how you'll see the game unconsciously. For one, nine times out of ten, it is the very first interactive thing you'll see about the game! If your menu is a multi-tabbed confusing mess that needs a 'search' function to find things, it's not a good first impressions, now is it?

Simplicity has been my motto with TAGAP menus, to the point that the core functionality of them is to this day based on Quake 2 from 1997. With the first two games this is more obvious, but it shows even with TAGAP 3 and 4.

For example, unlike most modern games that have huge sweeping animations for going from one menu to the next, TAGAP games just instantly plops you into the new menu in a millisecond. When I started work on the TAGAP 4 menus, I tried how the transitional animations would feel. The answers were 'not right' and 'wasting the player's time'. Speaking of wasting time, unlike most modern games TAGAP assumes you know what you want and doesn't stop to ask 'are you sure' on every button press (only on exiting the current game or the whole program).

With TAGAP 4 I've kept the layout pretty close to that of TAGAP 3. I just really liked how it turned out and decided to not break something that works. Naturally everything is modified to fit the new style, i.e. the new clean 45° angle look versus the rounded and shaded elements of the past. 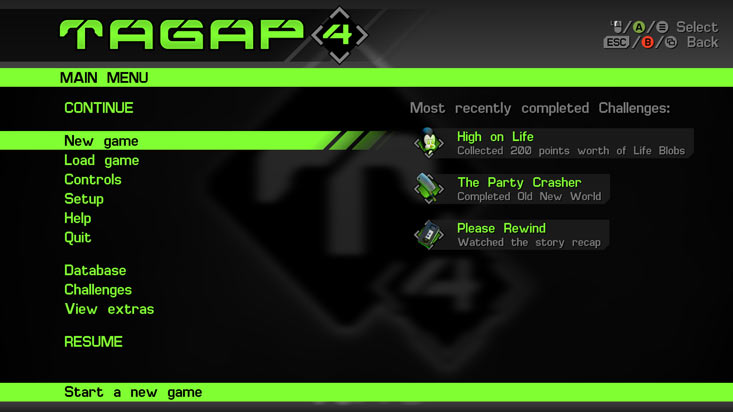 The TAGAP 4 main menu with everything you'd expect being here. And if you run the game in the developer mode, the level editor will also appear right here as well.

Loads the latest save game (a manual save or an autosave) and plops you straight to the game. 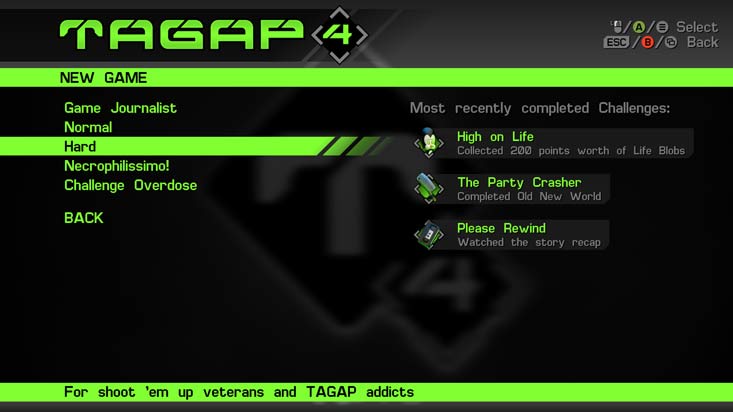 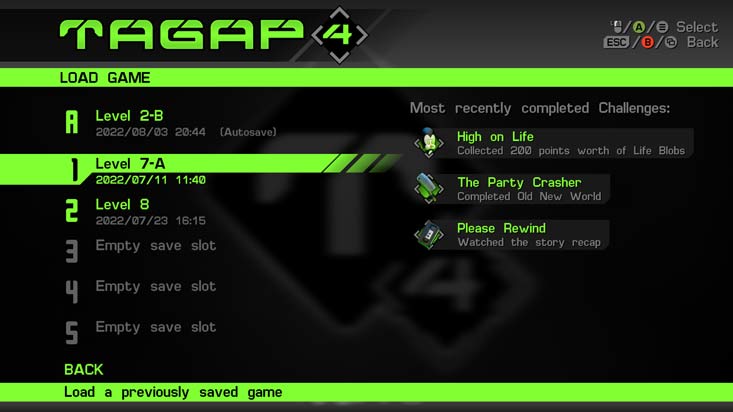 Probably the most stylised of the menu pages, the new save game menu is less cramped and has unique item highlights. You can tell pretty fast which save was which without needing to squint at tiny screenshots or staggered text. 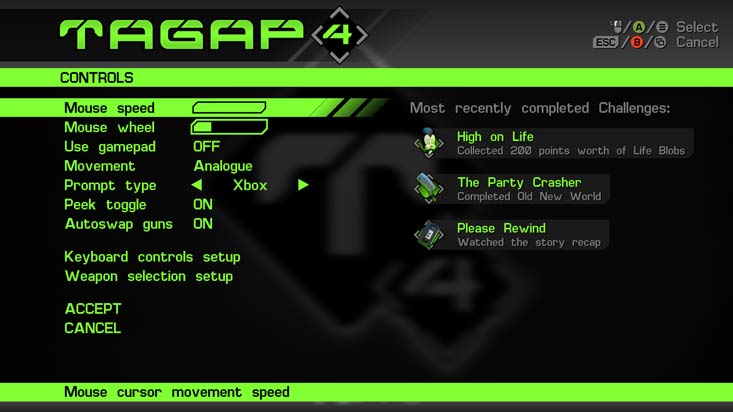 Controls menu remains almost the same, with just one big addition; weapon selection has its very own key bind menu. The ammo types are still selected with number keys, but you can customize almost everything else; ammo type browsing, weapon Core browsing, direct selection of each Core and the weapon wheel access. 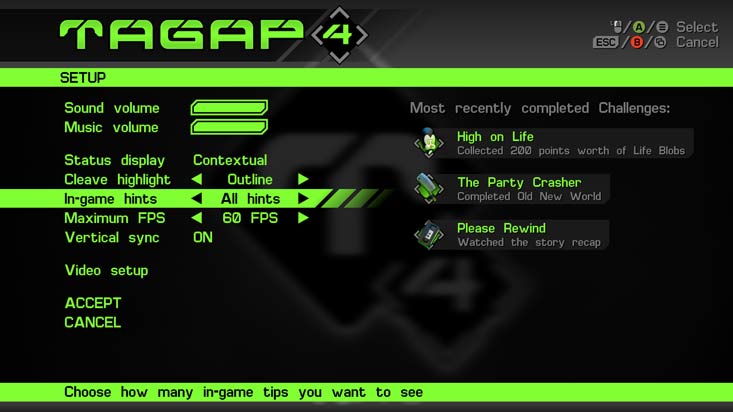 Almost everything non-controls related you'd wish to tweak can be found here. Most of the options should be familiar to TAGAP vets.

The two new options are the In-game hints and Cleave highlight selections. In-game hints is obvious – you can choose how many, if any, in-game tutorial messages you want to see.

Cleaving is our 'glory kills', so Cleave highlight is the thing you see on the enemies when they can be insta-fragged for Life Blobs. By default, you'll get the red shimmering outline you've seen in the trailers. This can be changed to a simple UI element or disabled altogether. 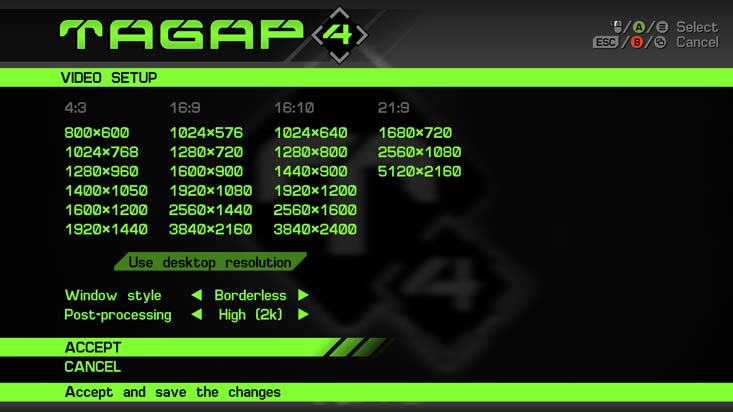 The major addition in the Video setup is the post processing resolution selection. In the case of TAGAP 4, that means lighting effects and distortion masks. Having lower resolution post processing can give a significant performance boost with the low end (integrated) graphics cards, but can add slight noise to the image. The noise is so slight your eyes likely won't notice it, but it could translate into more compression artefacts when uploading footage to services like YouTube.

You can bump this up to 4k as well, but considering most of TAGAP 4's assets (including effects) are done with 2k as their 'native resolution', you'll only get very slight improvements by doing so. But hey, if you have the GPU power to spare, why not?

The Map screen has a whole new look. Whereas the TAGAP 3 map was visually based on the classic DOOM automap, this new one is based on the virtual reality level of TAGAP 3. I feel this one is more aesthetically pleasing to the eye and easier to read.

On the nerdier side, the way the map is formed is completely different. Like much of TAGAP 4, the map is now almost completely shader driven, allowing the more stylized look. And even better, it is ten times easier to 'script' when building levels. 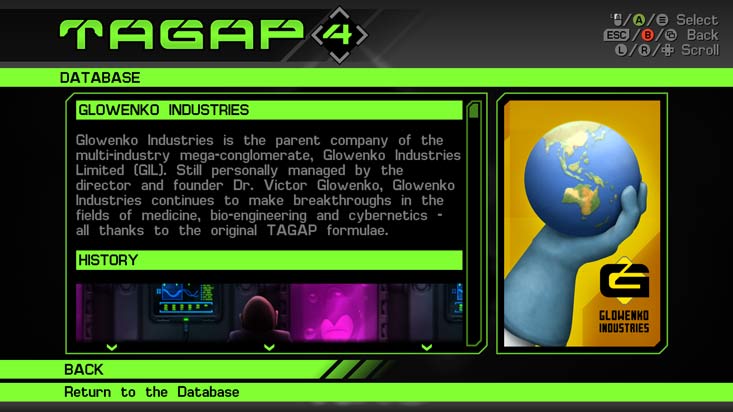 The Database entries, too, have a new look to them. Both cleaner and more striking, every entry now also has some HD artwork in the side panel. The text formatting tools are also much improved, allowing things like highlighting singular words. 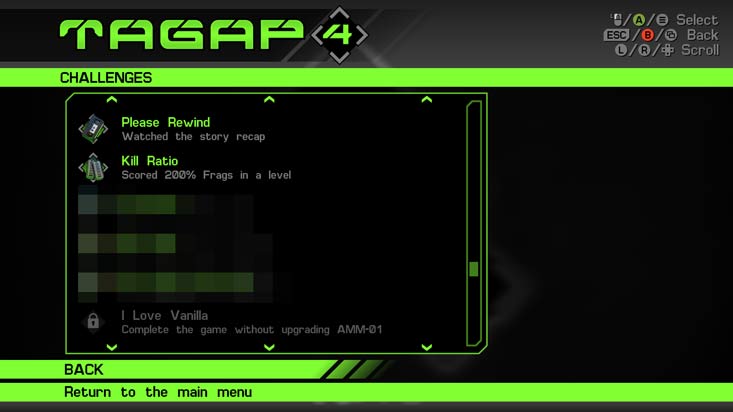 The Challenges – our Achievements or Trophies – are back. Currently there are 39 and they are split into two kinds; ones that are an actual challenge to complete and ones that are easy and more like guides to encourage you to experiment with gameplay features. I've blurred some of them here because, you know, spoilers.

I know I'll be asked this anyway, so I might as well reveal it now; the most difficult Challenges currently are 'I Love Vanilla' and 'The Master Penguin'. The latter is for completing the game without installing a single upgrade to your weapon, and the former is for completing the entire game without dying once. If you feel like the ultimate gamer god, try to unlock both at the same time – I know I likely wouldn't be able to do it! 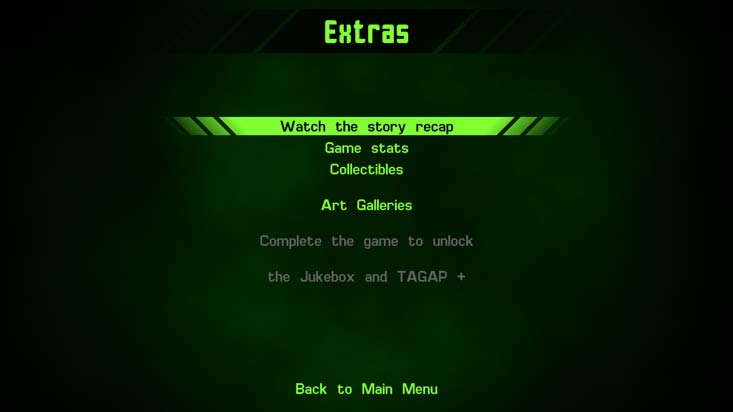 The Extras contain both the usual suspects... and TAGAP+.

The soundtrack Jukebox and TAGAP+ are unlocked once the main campaign is completed. TAGAP+ you should know of already and the Jukebox is something I'll leave for a little later.

The art galleries have a streamlined user interface you can easily browse both keyboard, mouse or game pad. For every couple of levels you'll automatically unlock a new gallery, complete with full commentary. Naturally some galleries, like the promotional art one, are unlocked from the get-go.

As a developer side note, the streamlined art gallery system I originally designed to make creation of the extras easier turned out to be a real creativity boon. The system is used in some of the most surprising places, for example the entire 'previously on TAGAP' sequence is basically an automated version of an art gallery. 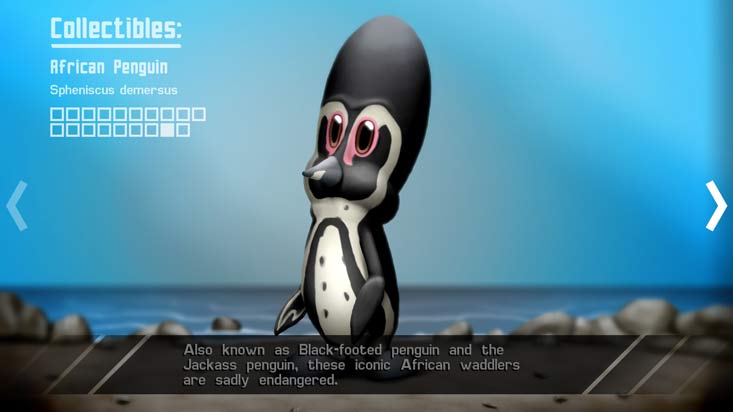 Unlockables are what I've already revealed earlier – TAGAPified penguin species of the world with info and trivia about every single one. You need to find the hidden penguin figurines in the game to unlock all of these!

So, that's the main menu. Come back next week for more TAGAP 4 media!