You play the part of Pablo, a cyber-penguin genetically built for combat. After defeating his creator Dr. Glowenko and stopping his insane Penguin Apocalypse, Pablo has assembled a base of sorts in Antarctica and he is determined to rid the world from the evil plots like the one of Dr. Glowenko.

Originally Pablo's adversary, Pedro joined his now-former-nemesis after being rescued from certain death. Pedro is much less an idealist than Pablo, fighting the war against evil mainly because fighting is what he does best. Pedro provides air support in single player game and joins Pablo side-by-side in co-op campaign.

General Primo is the ultimate evolution of the cybernetic combat penguin technology Dr. Glowenko pioneered with Pablo and Pedro. Imprisoned in stasis by his makers at R.E.P. Corporation, Primo is accidentally freed by the meddling of our heroes. Unleashed upon the world and wielding a massive mind-controlled penguin army, Primo is about to bring forth the Second Penguin Apocalypse!

Success rate of creating highly functional combat units like Pablo and Pedro is very low and most of the clone troops end up like zombies. However, thanks to the R.E.P.'s revolutionary BrainTweak™ mind control system even these almost braindead waddlers can be turned into workforce, security guards or just good, old-fashioned cannon fodder.

Rockhopper elites are, unlike the zombie penguins, created with much more advanced technology and higher success rate. These crested birds are a lot smarter, more agile, well trained and better equipped than any other combat penguin you've faced before. From tactical elites to Primo's flipper-picked Henchmen, rockhoppers are a force to be reckoned with.

Penguinators are robot penguins originally developed by Dr. Glowenko as fully artificial counterparts to the cyber-penguins. They may be a little slower than the Rockhopper Elite, but their thick titanium skin can take ten times more punishment. 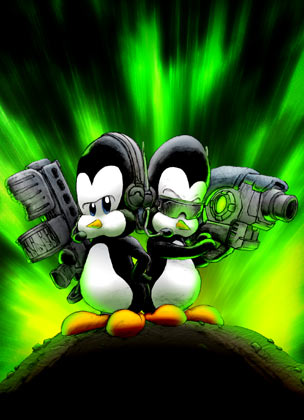