Soundtrack of TAGAP 3 is a wild and funky throwback sci-fi romp composed, arranged and produced by Petja Heiskanen. Though a lot more electronic in sound, the spirit of TAGAP is strong with this one!

This time around, Penguin DT's resident composer Petja Heiskanen had an unenviable task of composing a dynamic soundtrack. This meant meant that almost every song had to be mixed and/or composed in duplicates – one representing the action scenes and the other the more mellow exploration. And not only that, but Petja had to cover variety over several dozens of tracks, while still somehow having everything sound like a solid whole. The result is perhaps the most delightfully funky TAGAP soundtrack yet!

Instead of featuring every song twice on the album, we decided to go with only the 'action' versions. After all, Petja composed the songs AS those action versions first and then 'mellowed' them down.

And as before, if you wish to read through a track-by-track rundown of the entire album, you unlock the in-game Jukebox by completing the TAGAP 3 campaign. The Jukebox fully supports the dynamic soundtrack this time around, so you can switch between the action and mellow versions on the fly whilst reading about the tracks!

Huge thank you to Petja again for this funky-as-heck penguin album! 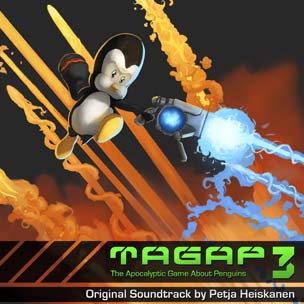