Pablo is a cybernetic battle penguin on a one bird crusade to save the world (or two). However, now he is stranded in a world that is both completely alien and at the same time, eerily familiar.

A mad scientist with unrivalled skills in cybernetics and bio-engineering, Doctor Victor Glowenko has always had big plans. For example; taking over the world with an army of battle penguins. Unlike most madmen, he succeeded – now he is the ruler of the world.

The cloned battle penguins form the back-bone of the GSEC forces. The clones deemed combat-capable are armed for the assault – and the rest are relegated to acting as both the labourers of the Glowenko Industries and cannon fodder on the battlefield.

Penguinators are autonomous artificial penguins built from steel, titanium and silicone. These sturdy buggers are widely used as sentry and guard units. They are fast to mass-produce and can operate in environments hazardous to organic life.

Though Glowenko Industries complex is manned mainly with battle penguins and robots, there's still use for loyal simian foot soldiers. GSEC guards are well equipped and armed – and are overseen by GSEC officers.

GSEC is equipped with the latest tech directly from Glowenko Industries and this includes a wide array of security robots. All the way from cleaning robots to infra-red tracking gun turrets and autonomous drones, GSEC has it all.

These just some of the early enemies you'll encounter – we don't want to spoil the rest! 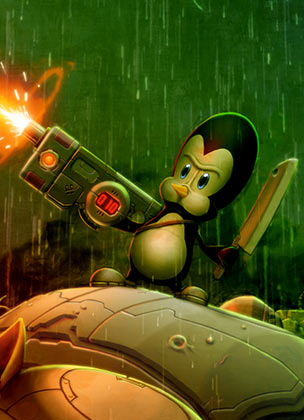