TAGAP 4 being all about seeing the origins of the series from completely new perspective, the double-album soundtrack goes back to the roots – but with a whole new sound!

Petja has knocked it out of the park, so to say, with the TAGAP 4 soundtrack. Even though the game itself is darker in tone than the previous titles, borrowing from games like DOOM 2016 and Brutal DOOM, Petja's decision to go with more heroic, even positive motifs took me off guard. But in a positive way. Contrast has always been a core tenet of TAGAP as a concept – the contrast of the violence and the cute penguins, of a serious backstory and the silly video game shenanigans. And this more positive vibe worked brilliantly as the contrast to the more intense action and gore.

I have to thank Petja again here publicly for not only producing the main soundtrack, but also for re-creating the original TAGAP album. Much like TAGAP+ itself, its soundtrack is the past with the instrumentation and mixing of TAGAP 4. A couple of tracks he had to re-do from scratch, having lost some of the source files in a hard-drive failure over a decade ago.

So, a HUGE thank you to the Funky Penguin Petja! And a special thank you also to Funk the Magic Monk for the brilliant end track! You can enjoy the double-album either as download or as a video stream (with visualisers). 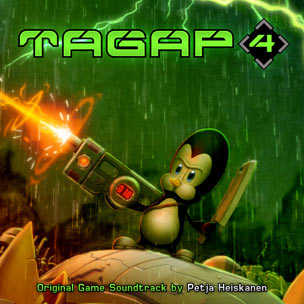