You play the part of Pablo, a cyber-penguin used in vile drug experiments and who's had enough of being guinea pig for Dr. Glowenko. Fueled by TAGAP and armed to... err... beak.

Penguin just like you – engineered to be more intelligent, powered by TAGAP and operating lethal weaponry. He remains loyal to his master who surely will reward him with plenty of TAGAP for delivering your head. Pedro is truly a worthy adversary.

Your fellow penguin inmates doped to zombies with the green pills. Their senses have been so corrupted by the drugs they eat quite about anything – including you. Feed 'em lead instead. Some less-demented zombies can use weapons and other devices.

Killer robot penguins – just when you thought you've seen it all, eh? They eat bullets for breakfast and some even come armed with Uzis and plasmaguns.

Pretty much a text book definition of mad scientist, doctor Glowenko is planning to rule the world – or destroy it so no-one else can! That means you have two good reasons to blow him up! 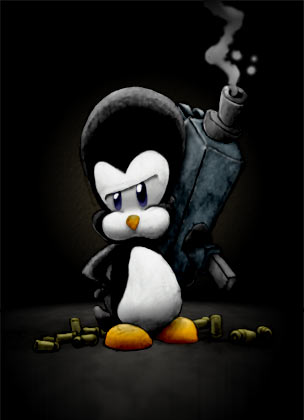