We have three things for you in celebration of surviving yet another year in this crazy world. First things first! 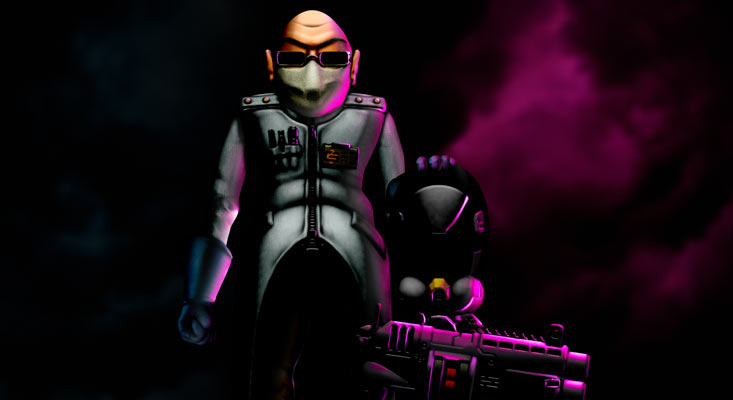 Check out the new Behind the Scenes -blog update to learn of the triumphant return of the original supervillain of TAGAP.

Second, with the reveal of our lead villain I'm also happy to announce that his exploits will be chronicled by a great artist, who you should already be familiar with. Poison Sleeper, the artist responsible for some amazing TAGAP fan art, is giving us a helping hand in creating diagetic art chronicling and glorifying Glowenko's conquests. Here are some of the examples of what you can expect to see in the future;

And the third thing?

Well, we can finally make it official.

Happy Holidays – and stay safe everybody!

Time for the 13th annual Weekly Penguin Holiday Greetings! Feel free to distribute this Christmas card to cheer up your penguin-loving friends and loved ones! This year, it is time to start and TAGAPify real-world penguin species, starting with the Chinstrap penguins! 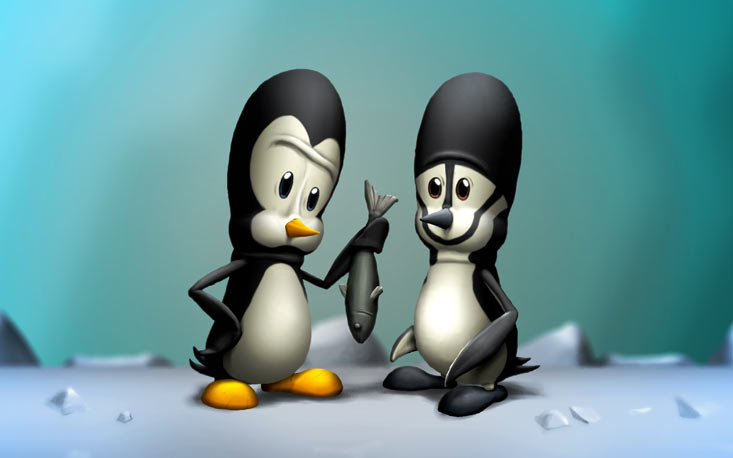 And as usual, on Christmas Eve we'll be releasing new TAGAP 4 goodness – this time being a new character reveal!

The TAGAP trilogy gets some upgrades!

There are two crucial things going on with updates across all the games. First is the entire codebase being moved to the Windows 10 SDK from the Windows 8.1 SDK. This, coupled with a full code revalidation sweeps and optimisation runthroughs, makes these the most future proof releases so far. If you've had any issues running these games on modern gaming rigs, they should be a thing of the past now.

Second, a long requested feature I thought I couldn't pull off without entirely re-doing how the games handle text output, is the support for Cyrillic multibyte characters. So, if you're a modder or translator wanting to tinker with TAGAP engine games, the script files can now be edited and saved in Unicode. ТАГАП, baby!

There are also other more minor fixes as well, but these two are the big ones.

The updates are, as always, available as patches, full game installers and as plain zip files. Whatever you need, you'll find it in the Download Classic TAGAP and Download TAGAP 3 sections.

It's November 14th and the 4th anniversary of TAGAP 3! How the time flies!

Now, there is a new update in the works for both Classic TAGAP and TAGAP 3 I was planning to have out today, but sadly I wasn't able to do that. Don't worry, the updates will be out later this month.

However, I won't let this anniversary go without celebrations, so how about character spotlight artwork for TAGAP 4? Both Pablo and the Nemesis get their own spotlight wallpapers;

Happy Birthday, TAGAP 3! And stay tuned for those TAGAP updates later this month.

It is July 31st which means it is the 14th anniversary of the original TAGAP! Oh, how the time flies! To celebrate this occasion, time for brand spanking new TAGAP 4 gameplay trailer. Without further ado, here is the entirety of the level 5, "Iron Foundry":

And since we recorded some high-quality footage, here are some selected screenshots from it for your viewing pleasures: 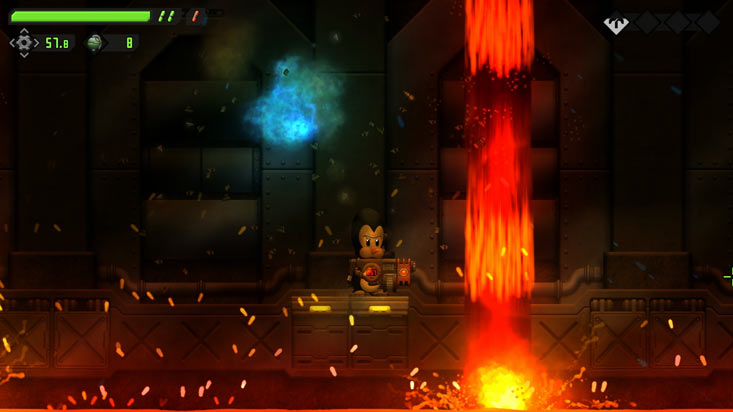 But that is not all – of course the music from the level is also available for download on SoundCloud. Here is "Hammond Foundry" by Petja Heiskanen:

And to wrap things up, as is tradition with our video releases, the brand new block update breaks down the entire walkthrough. Check it out!

As you can see, though we may have gone quiet for quite some time, we've been toiling away in the shadows. There's still work to be done, but we've come a long way already!

Have a fun TAGAP Day, everybody! 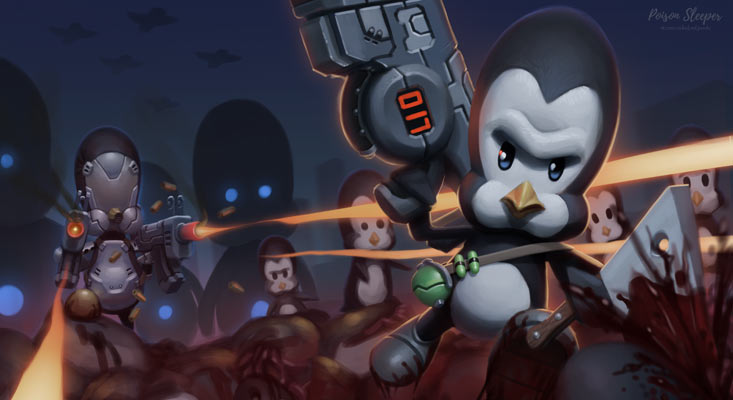 Out of the blue, a long-time TAGAP fan and an artist Poison Sleeper made one darned brilliant digital painting based on the TAGAP 4 adversaries, Pablo and the Nemesis! I absolutely love it and we're posting it here with the artist permission – available as a wallpaper.

Again, the attention to details is amazing – as someone who has been staring at these character in sprite form daily for almost four years now, I can tell you not a single bolt on the guns is out of place. What a great, atmospheric and cinematic action shot!

Thank you for this, Poison Sleeper! For more from the artist, check out his VK page. 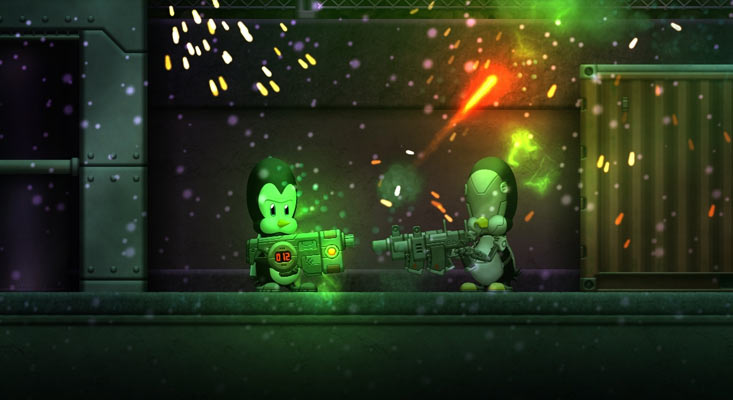 It is April 25th and that means... World Penguin Day!

As it is customary here in the land of TAGAP, that means more new screenshots. This one is from the first boss fight with the Nemesis. As you can see, the TAGAP 4 key art introduced in December isn't just a flashy design – that's pretty much how these two birbs duelling plays out!

Fashionably late as always – time to celebrate some good games! It is the 9th annual Penguin DT 'Games of the Year' showcase, where we share some of our favourite games from the bonkers year that was 2020. I've said this before, but it bears repeating; the year might've sucked in many ways, but we did get plenty of really darn good games music. 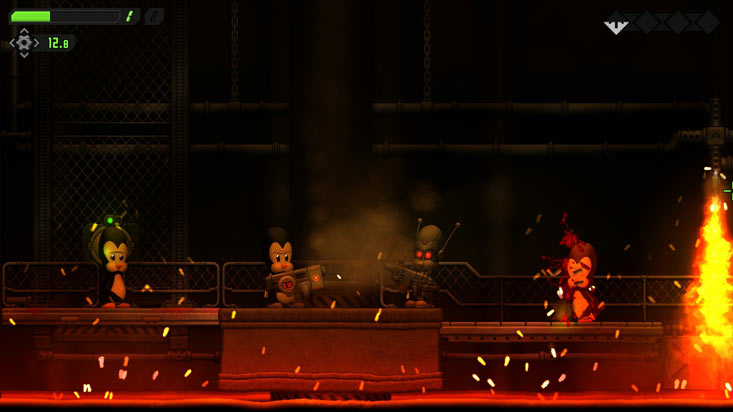 It's Penguin Awareness Day! It being kind of a big thing here in Penguin DT HQ, it is time to celebrate with a new TAGAP 4 screenshot. In a previous blog post I mentioned a level that was heavily inspired by Metallica's take on 'The Iron Foundry' by Alexander Mosolov. I'm happy to say that it really shows.