Told you something special was coming this way! As a holiday season's present to all TAGAP and penguin fans, here is the debut of the TAGAP 2 soundtrack – composed, produced and arranged by Petja Heiskanen. Without further ado;

But wait, there's more; Here are some brand new screenshots!

For detailed description of both the screenshots and Track One, check out the accompanying blog update. I hope this media blow-out makes the wait for the 2011 release of TAGAP 2 a little easier.

If you haven't noticed – which I find hard to believe – it's the winter holiday seasons all over again and we have a Holiday Seasons greeting eCard to give to you all! As always, If you haven't you're your eCards yet, feel free to use this one. 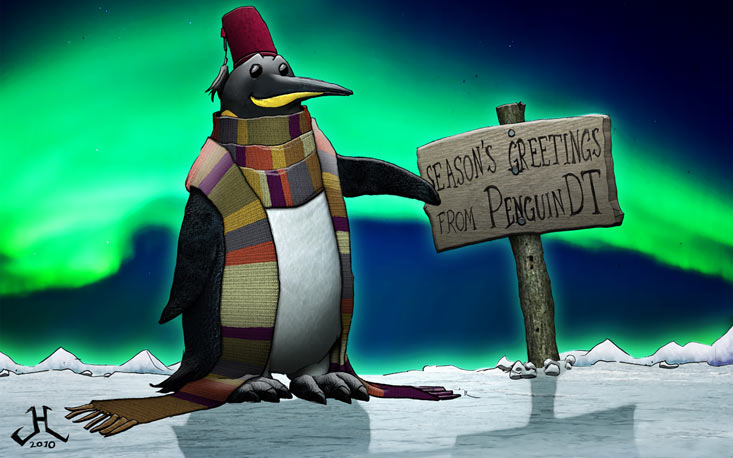 To share the card, use this permanent link: https://www.tagap.net/pow/p176.htm

And stay tuned, some TAGAP 2 goodies will be unleashed later this week, just in time for Christmas.

Tungo and his new beak

Non-TAGAP penguin news; Tungo, a five-month-old African penguin, had an unfortunate collision with a boat propeller. As the result, poor Tungo's beak was shattered, leaving him unable to catch fishes or even eat.

But wait, don't worry, as the vets of Rio de Janeiro decided to help the poor guy – and built him a brand new acrylic beak. Now Tungo his happy and good as new!

For the the original article, check out SkyNews article about the brave little Tungo. His recovery has also been covered by CBBC.

Quick update on the state of the forums. The forums are currently down and it is not a decision to deactivate them, but because of forces of nature; A lightning storm struck down the servers of the wonderful people hosting the forums. Forums will be back once they get a new system up and running. Extent of the damage is uncertain at this point, but hopefully the message board history can be restored.

It's also good to point out that forums are indeed hosted in a completely separate system. Neither the main TAGAP site or our production of TAGAP 2 were hindered.

We're really sorry for the inconvenience and we'll keep you posted on the matter.

FAQ update: How to play TAGAP with any game controller

Troubleshooting FAQ has been updated.

Recently I came across an unofficial emulator program aptly called XBox 360 Controller Emulator. This software can turn any DirectInput compatible controller into XInput device and thus makes them work, not only with TAGAP, but also with all other modern Games for Windows titles.

So, if you've wanted to play TAGAP (or any Games for Windows title) using a gamepad but your controller was an old DirectInput device, give this emulator a try. Note, though, that Xbox 360 Controller Emulator wasn't developed by us and as such we can't provide any technical support regarding it.

Time for the second 2010 website upgrade; The complete forum renewal. The new forum is already fully functional, only the TAGAP-themed layout is yet to be implemented. Few of the most recent forum posts from last week might be missing, but otherwise everything should have been transferred over to this new version.

It's worth to mention that this new system should have better spam protection. So, if you've left the TAGAP forums because of the excessive spam activity we've been hit with lately, now would be a good time to rejoin the conversation!

As you can see, first of the several planned website updates is here in the form of Twitter widget. Our Twitter has been up and running for a while now and is updated on pretty frequent basis on all things Penguin DT – and now it's right on the front page accompanying our other news feeds, so that even you non-tweeters can check out what is going on in TAGAP-land.

The Twitter won't replace the news or blog sections, but is more like a supplement to them. We've been hard at work on TAGAP 2 itself and haven't had much chance to blog about recent happenings, but Twitter is an excellent tool to keep all you eager TAGAP-addicts up to date.

Time for a non-TAGAP penguin newsflash. I just dug up an interesting tidbit released by National Geographic earlier this month. Remember Snowdrop, the albino penguin? Now, meet his opposite; Completely black penguin! Where Snowdrop had albinism, this king penguin has melanism, which in turn makes it appear all black.

Visit the National Geographic Traveler site for full report, photos and videos on this very unique waddler! Andrew Evans, thank you for documenting this penguin in black, it for sure made my day.

And no, this isn't an early April Fool thing, but real deal.