And we end the year with one of the most awesome Weekly Penguins to date. Meet... Pablo, Pedro and Primo! 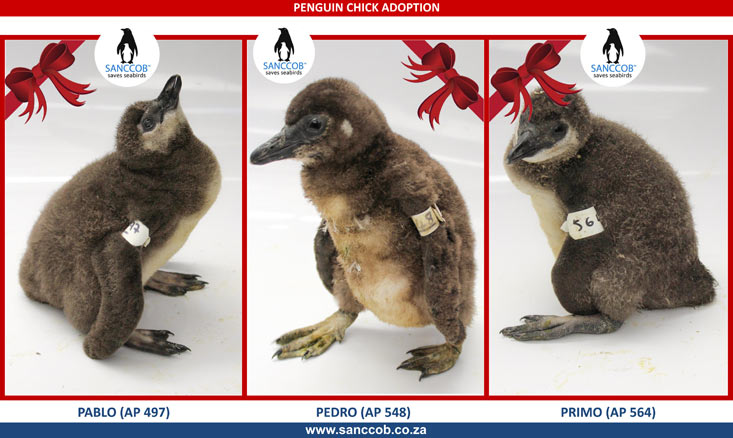 In a nut-shell; these fellows are penguin chick adoptees and part of African Penguin preservation efforts of SANCCOB (Southern African Foundation for the Conservation of Coastal Birds). For more information on these three fellows and SANCCOB, check out this week's Weekly Penguin entry.

For the full details Pedro's grand comeback, check out the brand new Making of TAGAP 3 blog post. And of course, there's a new screenshot! This time it's more low-gravity space combat outside the atmosphere domes of Pluto.

It's that time of the year again - Holiday Season 2015 is upon us! Well, that means it's the time for the 8th annual Weekly Penguin Season Greetings eCard! We're a day ahead of schedule this week just so you can use this eCard to cheer your loved ones! 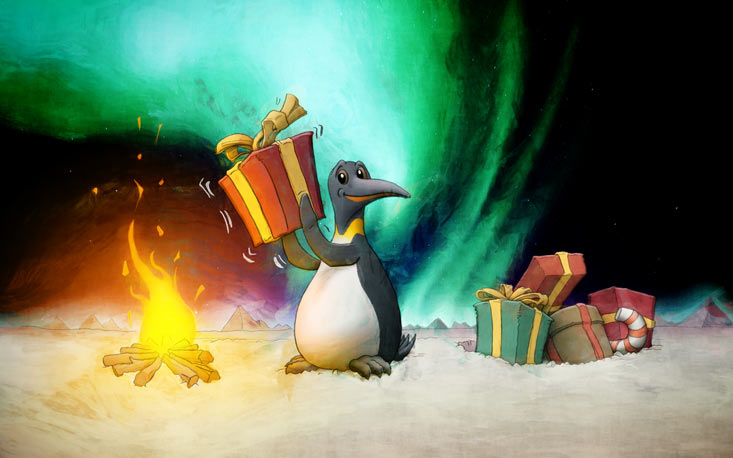 To share the card, use this permanent link: https://www.tagap.net/pow/p437.htm

The African penguins (Spheniscus demersus) obviously live in southern Africa and are, sadly, endangered with their numbers falling quite rapidly. African penguins are also known with two other names; first is 'the black-footed penguin', referring to their black feet that easily distinguish them from their similar looking cousins, Humboldt and Magellanic penguins.

Other, more awesome nickname for these fellows is 'Jackass penguin'. They're called that because, well, this:

This day is all about trying to raise awareness about these awesome little critters and the protection efforts going on. If you are interested in trying to help out, donating to SANCCOB (Southern African Foundation for the Conservation of Coastal Birds) might be your thing. Or simply spread the awareness on social media – there's a special Facebook group set up for just these tiny Tuxedo folks!

And it wouldn't be a 'penguin day' without us celebrating it somehow, so how about new TAGAP 3 screenshots – from a level we haven't showcased before! 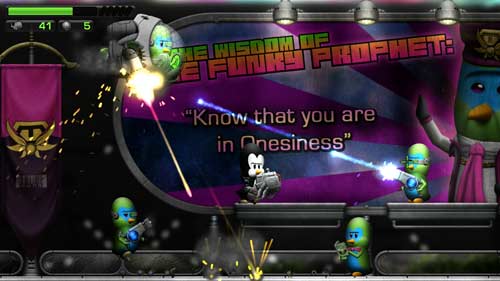 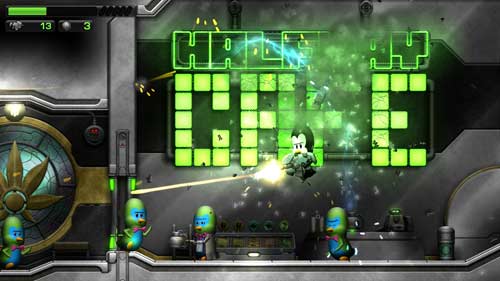 In case you haven't noticed by now, the two obsessions prominent here at Penguin DT headquarters are penguins and Doctor Who – and it's been a while since we've had the chance to combine the two. And now that Big Finish Productions is bringing back the grand spin-off Torchwood starring John Barrowman as Jack Harkness, it's time for penguin version of Captain Jack himself!

You know, this one started out as a mere pencil sketch I doodled on my lunch break yesterday. The doodle was so good I thought I'd clean it a bit and post it on Twitter for the special occasion. But one thing led to another and before I realized what happened, I had spent the evening photoshopping the doodle into a proper wallpaper!

So, a toast and a celebratory penguin to the return of Jack Harkness!

Delta Velocity returns with an in-depth TAGAP 3 gameplay analysis! He has really put the trailer under a microscope, digging up almost every detail with such a keen eye that it could conspiracy theorists TAGAP-green with envy;

As a fan of game trailers I find it fun to on the receiving end of an analysis like this! Time Lords know I myself have watched that E3 trailer for DOOM so many times it borders on unhealthy.

It is that time of the year again – the anniversary of the release dates of both TAGAP and TAGAP 2! To celebrate the occasion, we bring you the first full-length gameplay trailer – and by full-length, we mean it's a full level playthrough clocking at over 8 minutes! And the best part? It's in full 1080p and 60 FPS!

For full breakdown of the trailer, check out our accompanying new blog post. There are plenty of details pointed out you might otherwise miss. Also, here is a selection of screenshots lifted directly from this trailer;

But wait, wait; that is not all! This being the first unedited gameplay reel, it also is the public début of the TAGAP3 soundtrack, again composed and produced by Petja Heiskanen. The song is called "Electromagnetic Boogie" and is available for streaming and download on our SoundCloud;

I've been teasing folks on Twitter for a while now that new 8-minute reel of unedited TAGAP 3 gameplay will be unleashed on TAGAP Day – that is July 31st. There's still almost a week to go, but to tide you over, here's a screenshot from the video. 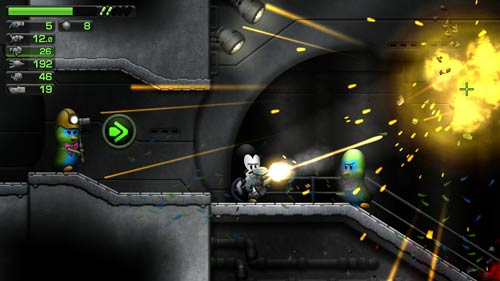 If you like what you see, stay tuned next Friday, July 31st, for the full gameplay demonstration in 1080p!

Supersonic blast from the past; TAGAP speedrun!

Oh my, good old TAGAP gets around, this time as a speedrun courtesy of S.Tagap (Shu . The Angry Gamer AR Plager)!

From the developer's perspective, I find it fascinating to see how fast you can actually beat the game we spent years creating. Speedrunning in general is something absolutely admire, but can't seem to do myself. I can't help it; every time I start a speedrun, after a minute or so my completionist OCD takes over and I find myself looking for secrets and side quests.

TAGAP.net will change servers today and it may or may not cause some issues. We here at Penguin DT have done all in our power to ensure the transition will be smooth, but you never know with these things.

As always with server changes, it will take a while for the name servers everywhere to update their domain information for TAGAP.net. Fear not, for a week or so we will post all the updates on both the old server and the new one – this way you won't miss a thing even if you end up in the old location instead.

As for why we're doing this, the answer is simple; while we absolutely love and appreciate the original hosts – folks who have maintained our servers all the way from 2007 – the service has switched hands so many times since then that we honestly have lost the track ages ago. In fact, we have no contact information what-so-ever in case something hits the fan, and that's not very future-proof, now is it?

Our new hosting services are being provided by INT2000 / Webol, the same great folks who have always handled our domain, so it's great to have everything under the same roof.

Blast from the past; New series of TAGAP Let's Plays!

The gameplay series continues; check out Delta Velocity's channel for the whole series!

It's been quite a while since the first TAGAP from 2007 has been in our headlines, but here Pablo's first adventure get's some love from Delta Velocity in his Let's Play series!

It's always great to see Pablo around the Interwebs – thank you Delta Velocity for revisiting his original adventures!

While we usually have only the one Weekly Penguin, the placement of World Penguin Day on April 25th gave us the perfect excuse to have one extra post. And it is something completely new to the Weekly Penguin feature – Penguin anime in form of Mawaru Penguindrum. It's really all kinds of special and worth checking out!

To celebrate World Penguin Day further, here's one adorable clip from the absolutely brilliant Spy in the Huddle from BBC, as narrated by David Tennant;

Have a waddling World Penguin Day!

Whoa! We've reached Weekly Penguin #400! What started out as a fun way to introduce Pablo and Pedro back in summer 2007 soon became a stable feature of the site – and it shows no signs of slowing down. And we celebrate the penguin greatness with a classic penguin scene;

If you're interested to see what the other 399 penguins were, they all are still online in the Weekly Penguin archives – and many of them have been featured as desktop wallpapers, including this one!

So, here's to the first 400 Weekly Penguins!

The Other Penguin Doctors

It's the mini-anniversary for the Best Television Show in the Universe™ – ten years ago today the regenerated version of Doctor Who got its premier with "Rose", creating a brand new generation of Whovians. While we don't have anything super-grand to showcase for this mini-anniversary, we do have something tucked deep in our sleeves.

You might remember that for the 50th anniversary of the series, in 2013, we created The Eleven Penguin Doctors wallpaper series. Well, I originally drew 13 but only had the time to colour the Main Eleven – the other two being The War Doctor (John Hurt) and the mysterious Evil Future Doctor, The Valeyard (Michael Jayston). In case you were wondering 'where is Capaldi?', remember that I drew these prior to his début. In fact I'm not even sure if his costume was revealed at that point.

Anyway, here are the Two Other Penguin Doctors. Perhaps one day, if Pablo let's me have the time off TAGAP 3, I can colour these as well! 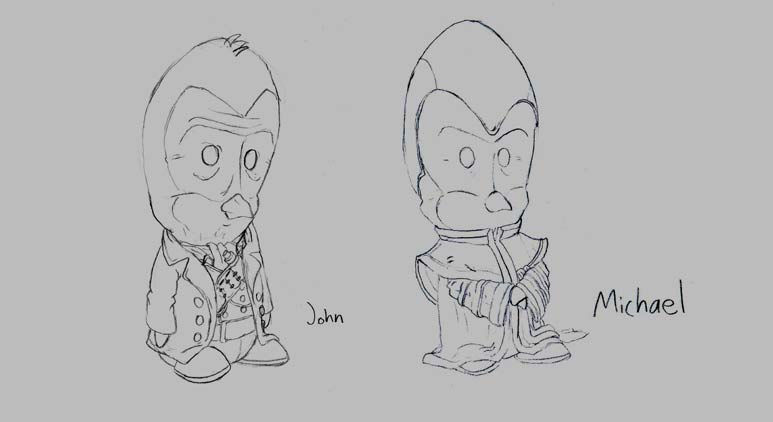 Penguin Place is wildlife reserve in New Zealand that runs a penguin hospital. Currently they are housing about 50 penguins that are suffering from wounds caused by unprecedented aggressiveness of the local barracouta fish population. At the hospital, the penguins can recuperate in peace while adding extra kilos to carry them through their moult.

The problem? According to the rehabilitators, their usual suppliers have run out of the fish the penguins need; Salmon smolt or silverside. This sadly means soon they can no longer look after our waddling friends, unless they can acquire funds to purchase the penguin food at extra cost from elsewhere.

If you have the means to donate towards helping out the poorly penguins of New Zealand, you can find the details on TVNZ news site.

Today, January 20th, is the Penguin Awareness Day! For the occasion, we've prepared something a bit more grand than the usual Weekly Penguin – a character introduction! Get ready to meet one of TAGAP 3's big baddies; The Funky Doctor!

In addition to his Weekly Penguin spotlight, we've cooked up a new Making of TAGAP 3 blog post for a proper introduction.

Have a great Penguin Awareness Day!

Sadly, the video referenced in this item is no longer available.

It's 2015! Most folks are forced to begin the new year by doing an inventory, but for some the gig is more fun than for others. For us it's about counting penguins – and to be precise, about checking what penguins from my seemingly-endless collection we have featured as Weekly Penguins and what we've missed.

First Weekly from this inventory session us this ZSL London Zoo penguin fridge magnet. Coincidentally, the ZSL London Zoo did their own animal inventory recently, and the results are in; one Rockhopper – that would be Ricky – and 70 Humboldts, including 10 new chicks! The Zoo posted this video of featuring the residents of the zoo being inventoried.