This year, our holiday bag-of-goods is slightly slimmer than usual due something as boring as scheduling conflicts. No, it's not the pandemic or anything bad even, on the contrary. But it has resulted in me not having the time to do what I originally planned – to make a full-blown trailer reveal of the main TAGAP 4 antagonist.

But just because I didn't have the time to make the trailer, it doesn't mean we can't introduce this new penguin anyway, right? Without further ado, here's the TAGAP 4 Key Art, featuring Pablo vs the Nemesis!

For more information who the Nemesis is, check out the brand new 'Making of TAGAP 4' blog update.

Happy Holidays – and stay safe everybody!

Time for the 12th annual Weekly Penguin Holiday Greetings! Feel free to distribute this Christmas card to cheer up your penguin-loving friends and loved ones! Like last year, this one is available as both a video and as a wallpaper.

To share the card, use this permanent link: https://www.tagap.net/pow/p696.htm

And as always, we have something special up our sleeves for the Christmas Eve – remember check back then.

New set of updates for the entire TAGAP trilogy!

Classic TAGAP gets some important fixes, including potential scripting conflicts in TAGAP and Achievement issues in TAGAP 2. TAGAP 3 also gets a couple of Challenge-completion issues – including fixing the "Exterminate" challenge that was (stupidly) broken by the previous update.

For full list of fixes check out the full version histories for Classic TAGAP and TAGAP 3.

The updates are, as always, available as patches, full game installers and as plain zip files. Whatever you need, you'll find it in the Dowload Classic TAGAP and Download TAGAP 3 sections.

Thanks to you lovely folks reporting in bugs, we're going to roll out a brand new trilogy of updates to both Classic TAGAP and TAGAP 3 very soon. And by 'soon' I don't mean it the way The New Bloods uses it, but next week!

The range of fixes include everything from graphical snafus to Challenge unlocking woes. Full list of fixes – and the updates themselves – arrive next week!

Now we apparently are no longer a bot? That's nice to know, but Twitter being Twitter, it never told us why it thought as much in the first place. We're monitoring the situation.

Minor update on our Twitter; apparently Twitter think's we're a bot. Obviously we're not, but we can't do anything over there at the moment. So if we're not replying to help requests etc., it's because of that. If this isn't solved, I may delete our long-living account; there's no point in having a public-facing account you can't use.

I'll keep you posted here on what happens with the account.

Yes, you read that right; we went from 2.2 to 2.5. The two in between were drastically different attempts at fixing a reported bug, but neither attempt was a success, thus they weren't officially released.

While there is still at least one more update incoming to TAGAP 3, including some new features and more improvements, we decided to unleash this stability in the interim. Better have you lovely folks going about penguin apocalypse in a more steady manner than wait for a big splash patch, right?

You can download the new version as a stand-alone installer, plain zip file or as a light-weight patch to the previous versions of TAGAP 3.

Crucial hotfix to the TAGAP 3 hotfix

Huge apology for the previous update – while it improved the stability, apparently it didn't knock out the crash bugs for everone. As a result, I went back to the proverbial drawing board, armed myself with coffee and started bug hunting. About ten hours later here we are, with a hotfix to a hotfix.

You can download the hotfix as a stand-alone installer, plain zip file or as a light-weight patch to the previous versions of TAGAP 3.

Here's hoping this has finally gotten rid of the nasty bugs! A huge thank-you for everyone reporting in on the issues, we wouldn't have been able to fix them without your help.

On TAGAP 3 front, there is a crucial hotfix to the crash issues that popped up with the previous release. My sincerest apologies for these bugs happening. These bugs were really, really hard to track down, as due to different compiler time optimisations requirements between debug and release builds, I wasn't able to replicate the problem in the debug version. But I think I have now cracked the problem – if not, please let me know. 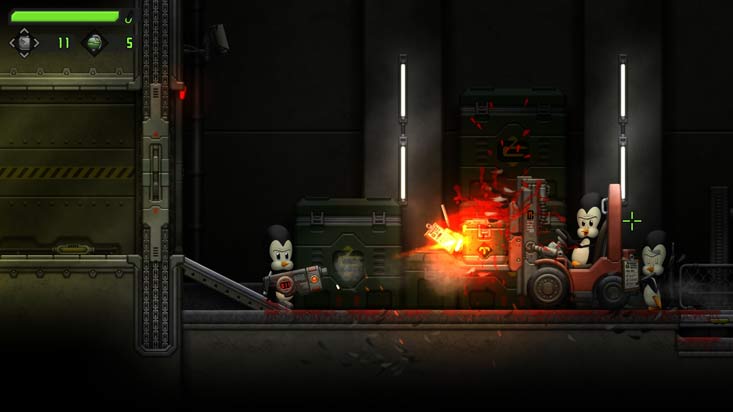 Today marks the 13th anniversary of the launch of the original TAGAP – and it has become a yearly tradition to celebrate with some TAGAP goodies! Whilst we don't have a new trailer this time around, we did prepare a selection of screenshots from TAGAP 4.

These screenshots showcase familiar settings from the very first TAGAP, completely re-designed and re-imagined for the new gameplay mechanics and HD artwork. TAGAP 4 is NOT a remake, mind, but you do get to visit some places from the past that are still standing in this timeline – as there was no Pablo to destroy them.

And that is not all! I've finally dedicated a day of internet bandwidth to upload the 150 GB uncompressed version of the TAGAP 4 gameplay reveal to YouTube. The original encoded upload, though it was exactly as specified in the specs, was made blurry as heck by YouTube's compression algorithm – it really, REALLY hated our rain effects. The new version looks a lot better, though the download version is still superior in comparison.

And finally, naturally there's a new blog update on the TAGAP going-ons!

Updates! Updates to everything!

Classic TAGAP v3.3 and TAGAP 3 v2.0 are now available to download. These updates include critical hotfixes addressing what turned out to be a memory leak, potentially resulting in crashes. Both releases also have further effects engine optimizations – as well as updated sound engine.

Long-time TAGAP speed-runner Veldoodles has done complete longplay runs of the trilogy, the idea being that if you need some TAGAP B-roll but don't have the time to record some of your own, you're free to use his. If you do, give him a shoutout!

The full trilogy is now up:

These videos have also now have a dedicated new FAQ page, Playthroughs. Huge Thank You to Veldoodles!

Speaking of Veldoodles' videos, his uploads got claimed by some nefarious music rights companies, who think they own parts of the OSTs – which obviously is completely bull. The reason the Classic TAGAP update was delayed last week is because of this, as I've been forced to study my legal options on the matter. YouTube, eh?

Unless something else catastrophic occurs, the delayed Classic TAGAP update should launch THIS week. 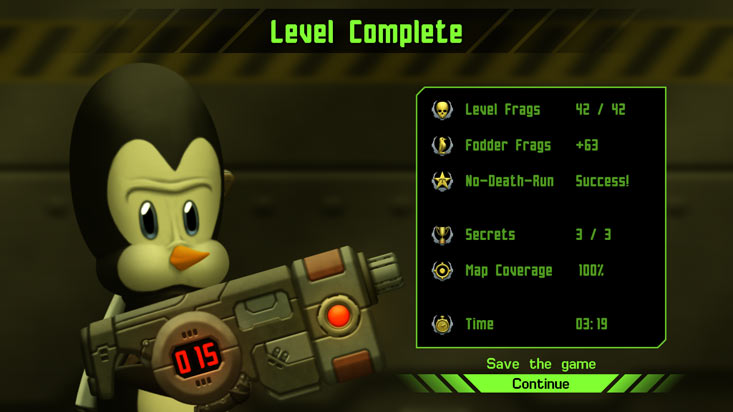 Since my schedule went haywire and I had to postone the Classic TAGAP updates to next week, would a new TAGAP 4 be an apt form of a penguin apology?

And yes, in TAGAP 4 we – finally – have the proper level completion stats tracking.

A smaller hot-fix styled TAGAP 3 update v1.9, improving stabilitiy and fixing issues resulting from the more extereme optimisation steps taken with the previous release. In other words; if you ran into technical troubles when running the previous release, this hopefully fixes your issues. For the full list of changes, check out the version history.

While every day is a penguin day in Penguin DT HQ, we take the World Penguin Day as an excuse to celebrate.

And you know us; we'll celebrate the occasion with the only way possible – with a brand new TAGAP 4 screenshot! For more information on the new enemy seen in the shot, check out the brand new behind-the-scenes blog post.

Updates to the whole TAGAP trilogy!

April starts with brand new updates for both the Classic TAGAP and TAGAP 3!

TAGAP 3 v1.8 brings the Classic TAGAP improvements to Pablo's adventures on Pluto – including 21:9 monitor support and loads of optimisations to the engine.

And all the games get analogue movement support when using controllers. You can toggle between the classic digital and the new analogue movement. For full list of changes, check out the release notes for the Classic TAGAP and TAGAP 3.

To download the updates, check out the download sections for both Classic TAGAP and TAGAP 3. As always, the updates are available as stand-alone installers, separate patches and as plain ZIP files.

Watch out, denizens of Hell, there's a new Slayer in town! With the great Prinny solo games just being announced for re-release, I thought to combine the two things I love - blowing demons and penguins – or Disgaea and DOOM. 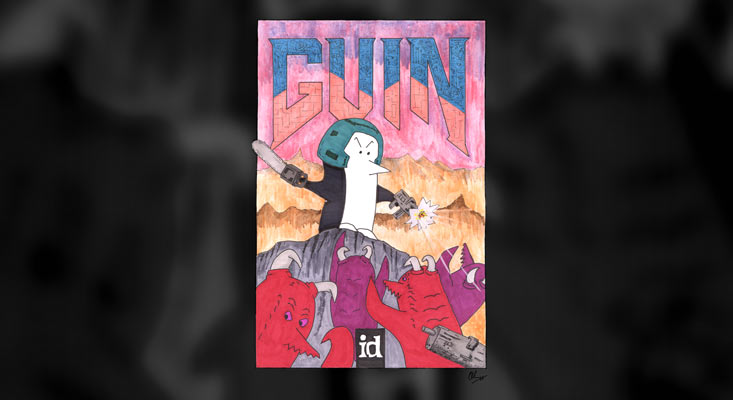 DOOMsday approaches – and we here at Penguin DT are pretty darned hyped! We're SO hyped, in fact, that we've roped our Internet penguin colleagues into it! Here is Alan Henderson's epic Penned Guin take on DOOM. This was a commission available through the recent Kickstarter campaign for "Vision", the latest compilation of the Penned Guin.

For more information – and the 4k wallpaper – check out this week's Weekly Penguin!

A bit late, perhaps, but then again, it is never too late to celebrate some good games. So, welcome to the 8th annual Penguin DT 'Games of the Year' showcase, where we share some of the games we loved over the year!